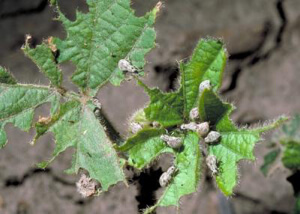 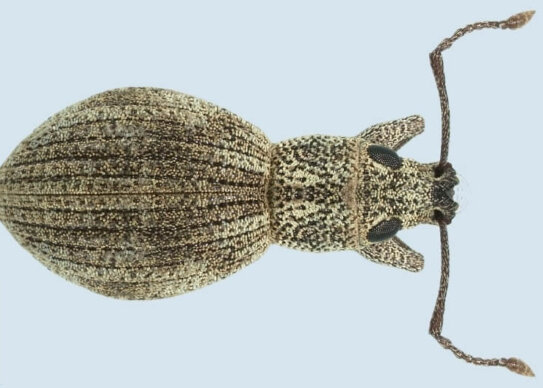 The Imported Longhorned Weevil (ILW) (Calomycterus setarius) is originally from Japan and was first recorded in the United States in 1929. The weevil was first reported in Iowa in 1943. Reported infestations of ILW are rare. This insect rarely causes economic damage to soybeans, but it can cause considerable injury in early vegetative stage soybeans when a large population is present.

The ILW adult is small (about 1/8 inches long) with a broad snout, wide pronotum (“neck”), and swollen elytra (wing covers) covered with rows of short, stiff hairs. It is mottled gray with 20 shallow grooves extending the length of the elytra. The antennae are “elbowed” near the middle (Figure 1). 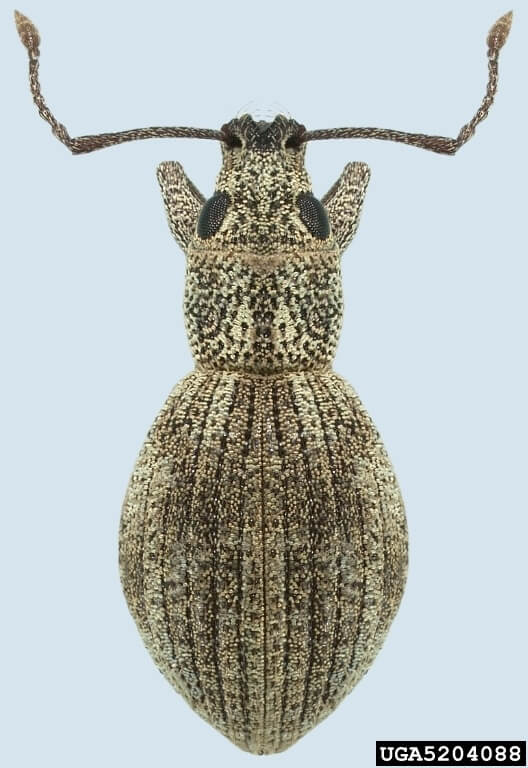 Adults do not fly and therefore movement is limited to walking short distances.

As you scout for grasshoppers and two-spotted spider mites, look for the ILW, too. The weevils are found on soybean in late June to early July, when they feed on leaf tissue and smaller veins, usually from the seedling to V4 stage of soybean development. Their feeding causes a ragged, scalloped leaf border and tends to be found mainly on field margins (Figure 2).

Very large populations of adults in Iowa have been observed moving into soybeans from adjacent bromegrass waterways or fields. This allows for explosive populations to build up when conditions are right.

Even under extremely large populations, significant defoliation is confined to border rows and most plants grow faster than the advancing weevils can defoliate them. Plants that are completely defoliated may not produce any beans. There are no treatment recommendations for ILW in soybean because they are not known to cause economic injury.