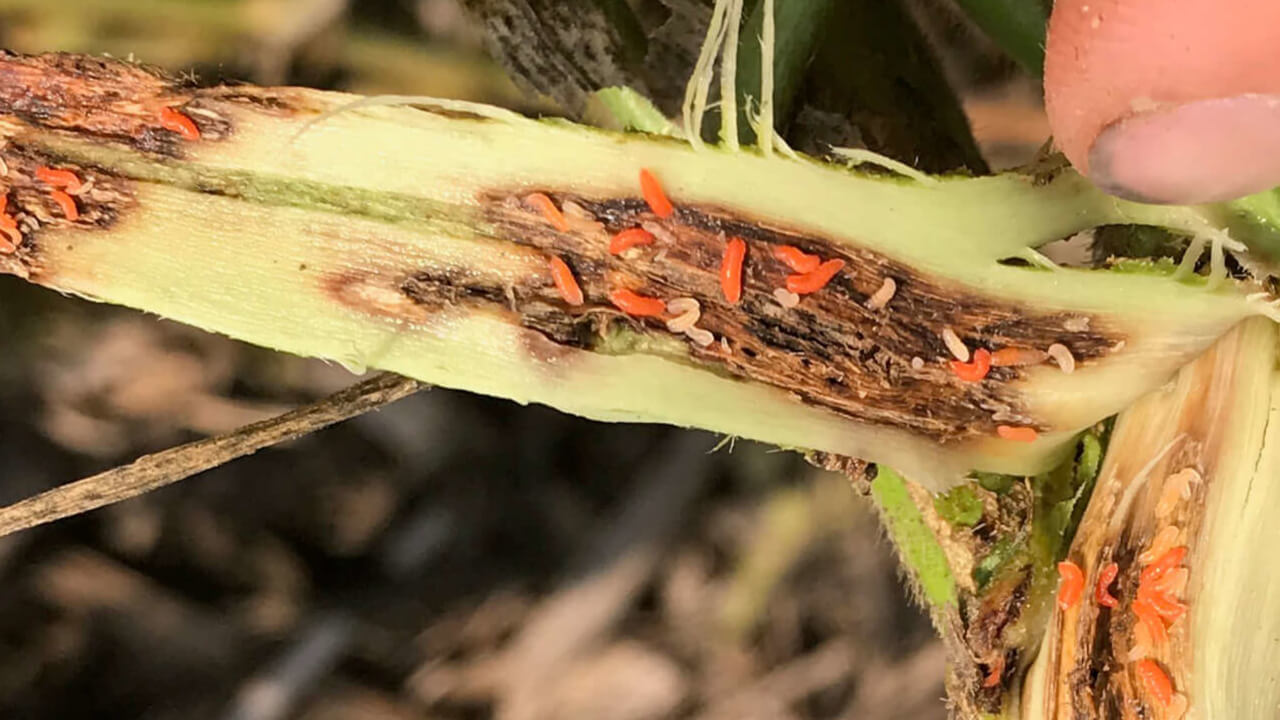 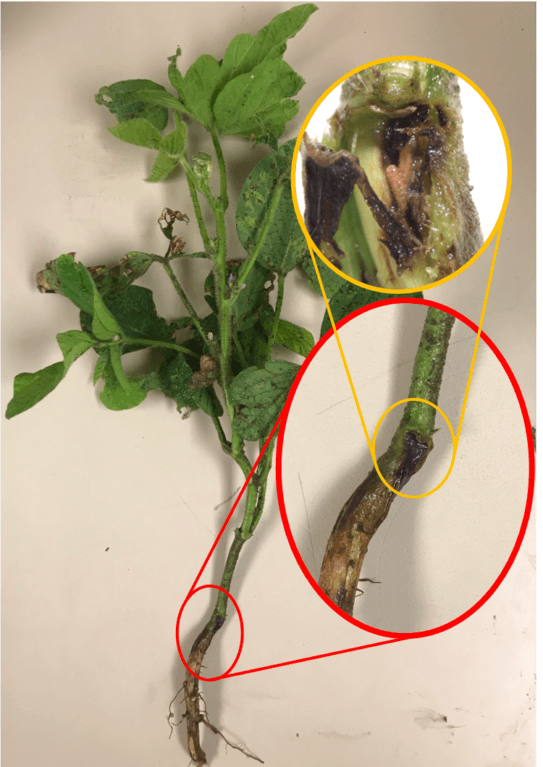 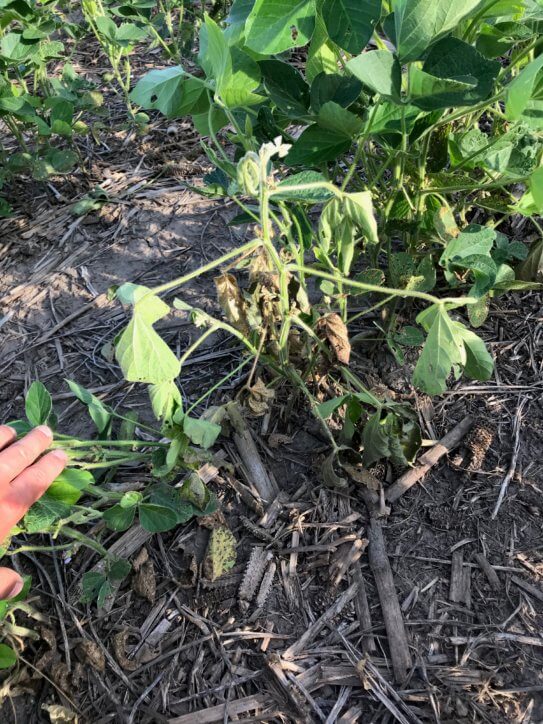 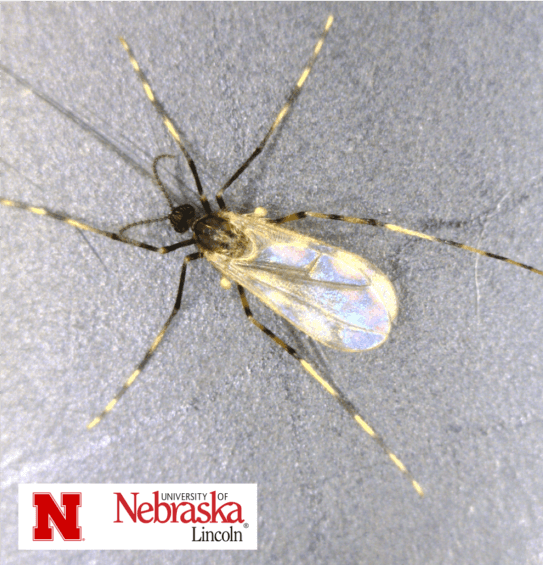 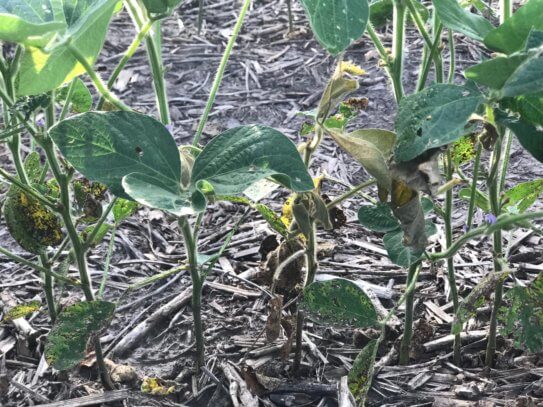 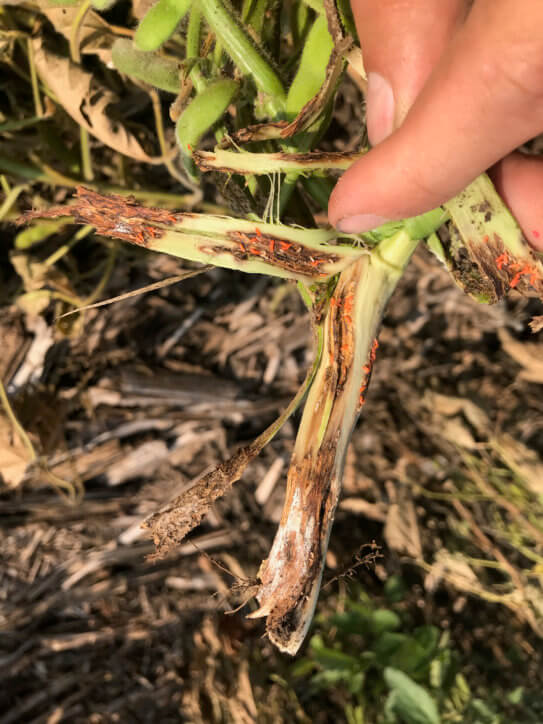 The Soybean Gall Midge (Resseliella maxima) was first documented in Nebraska in 2011 and South Dakota in 2015. It belongs to the same family as Hessian fly and wheat midge, which are pests in wheat. Initially it was only identified to genus, but was described as a new species in late 2018.

Midges belong to a large and diverse family of flies — there are over 1000 species of midges in North America. Some midges are economically important plant pests; others are predatory on aphids and mites. Some midges form abnormal growths, called galls, as they feed.

Soybean gall midge overwinters as larvae (worm-like immatures) in the first few inches of soil. After pupation in the early spring, adult midges emerge and lay their eggs at the base or lower stems of soybean plants.

The eggs hatch and the larvae feed on the stems. Infestation does not occur until after the V3 stage and can continue into the reproductive growth stages. There can be at least two generations per growing season. The adult gall midge does not feed on soybeans.

Begin scouting soybean plants after the V2 growth stage. Wilting or dead soybeans along field edges with decreasing damage into the center of the field is usually the first sign of infestation. Look for dark discoloration at the base of the stem. Heavily infested plants eventually wilt and die. Stems of infested plants become brittle and can break near their base. Peel back the epidermis of the stem and look for small, orange larvae, which is considered diagnostic for this pest. The heaviest infestations have been observed in fields next to a field that had been planted to soybean in the previous year. See a scouting video here.

To date, the gall midge has been found and identified in Nebraska, Iowa, Minnesota, Missouri, and South Dakota. It is not known if the soybean gall midge will persist in areas where it caused economic losses in previous years or if it will spread to other areas.

Because this is a very new pest, there are not yet any published research-based management recommendations. Checkoff funding is supporting on-farm studies in multiple states on the efficacy of cultural practices and insecticides on injury due to gall midge feeding.

In heavily damaged fields, losses associated with soybean gall midge are inevitable due to the number of dead or dying soybean plants. Damage to the phloem and xylem of the plant is likely to result in yield reductions for surviving soybean gall midge infested plants. Additional losses are also anticipated due to the lack of stem strength, predisposing plants to increased risk of lodging if crop harvest is delayed. Yield loss estimates on a small sample of plants from a heavily damaged field indicate complete yield losses from the field edge up to 100 feet, with about a 20% yield loss 200 and 400 feet from the field edge.

To date, seed treatments have not been effective. It appears that June planted soybeans have lower infestation rates. Application of foliar insecticides could be an option in the future, but insecticide efficacy and application timing need to be studied. Extended emergence and multiple generations could make insecticide control of adults difficult. If host plant resistance can be identified, varieties resistant to soybean gall midge could be a valuable management tool.