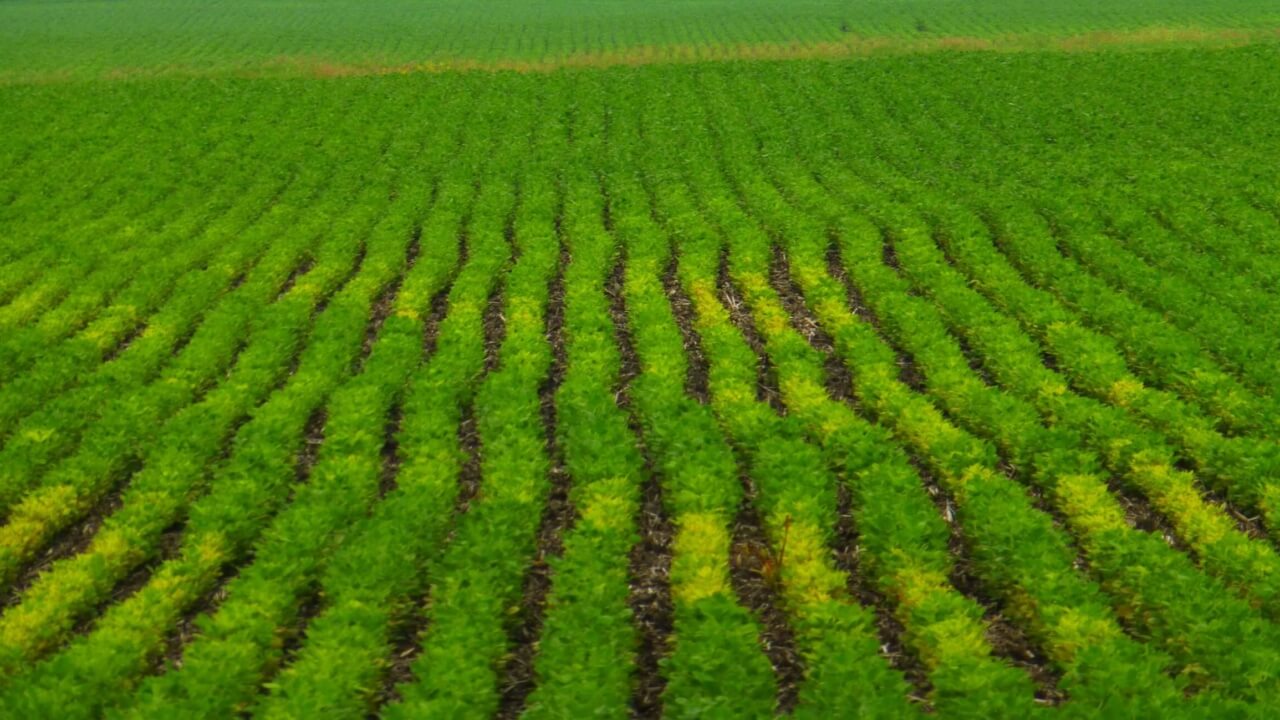 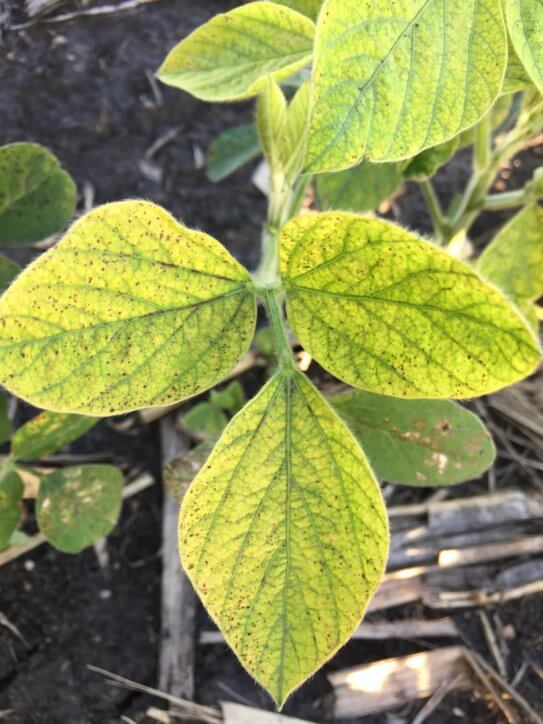 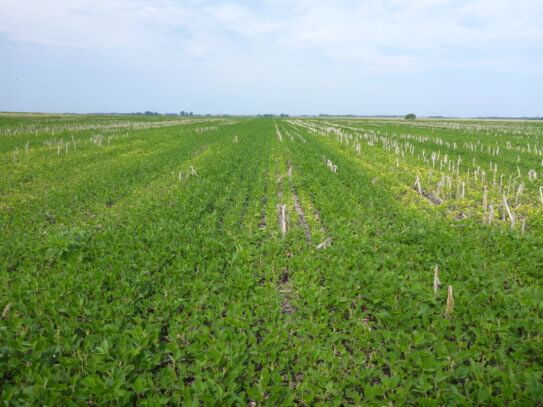 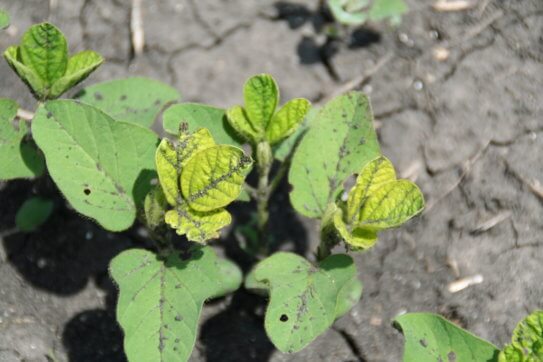 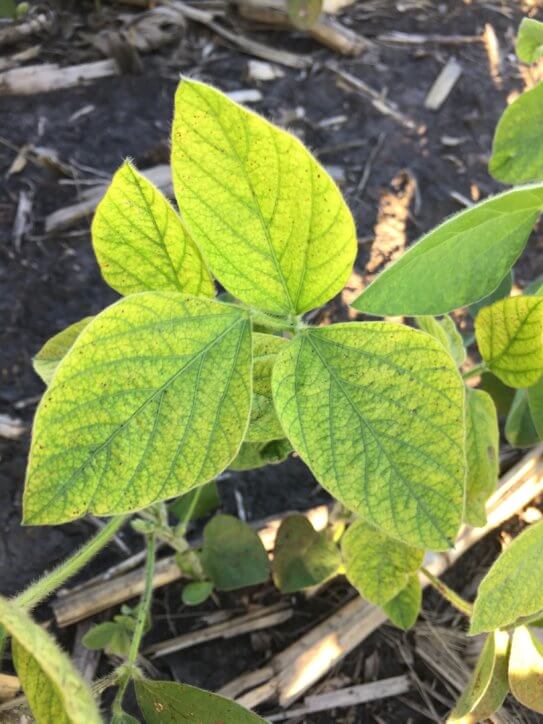 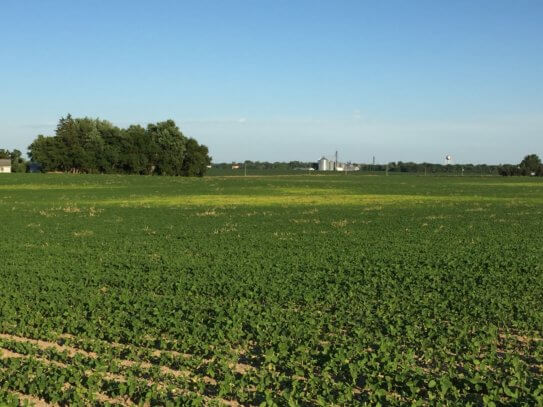 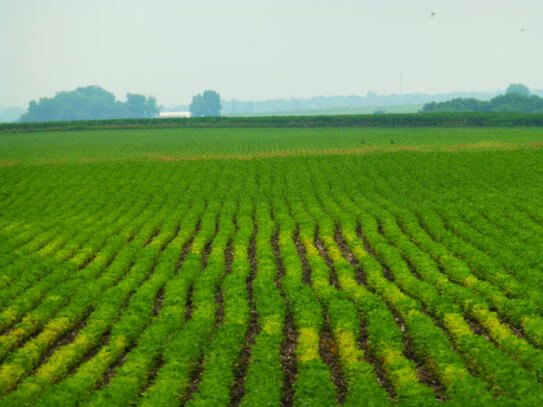 Iron Deficiency Chlorosis (IDC) of soybean is a physiological disorder caused by iron deficiency in the plant that can result in substantial yield loss within affected areas of a field. IDC is not caused by a lack of iron in the soil, but by an inability of the plant to take it up.

Soybeans are particularly susceptible to IDC. Soybean plants obtain iron from the soil by releasing acids from their roots into the soil that help solubilize the iron into a form more readily taken up by the roots. In high pH soils with high levels of calcium carbonate, the fine calcium carbonate particles contact the soybean root and slowly neutralize the excreted acid meant to solubilize iron in the soil. The effect is that the plants cannot take up iron that is in the soil.

Iron is necessary for the formation of chlorophyll, which is the green pigment in plants necessary for photosynthesis to occur. When the plant does not take up enough iron, chlorophyll synthesis is inhibited, and yellowing begins to occur between the leaf veins. Because iron is not mobile in the plant, the deficiency is observed in the youngest leaves first. When weather related, the deficiency may be temporary with no effect on yield. Under more severe conditions both growth and yield are affected.

IDC often shows up first in low, wet areas of a field. Lack of oxygen around the roots inhibits the plants ability to take up certain nutrients including iron. As soils warm and dry, the symptoms gradually begin to fade. In some soybean growing areas, especially in the Great Plains production region, many soils are naturally calcareous and can have a pH that exceeds 8.0. In these areas, IDC can be an annual problem. High pH can also occur where land-leveling or soil erosion has exposed subsurface layers of the soil that are naturally higher in pH.

Symptoms will appear on the youngest leaves first. The leaves are yellow with the veins remaining green. The older trifoliolate leaves remain green. IDC can be confused with other problems such as atrazine injury. With atrazine injury, however, the yellowing will be on the lowest leaves and the upper leaves will retain their green color. Other causes of yellowing that should be considered include nitrogen deficiency, potassium deficiency, the temporary yellowing sometimes caused by mid-season glyphosate applications, and soil carryover injury from Group 2 ALS inhibitor herbicides. When IDC persists or is severe, leaves turn white and plant growth may be severely stunted.

Root rot often occurs on plants suffering from IDC. This is thought to be due to the increased susceptibility of chlorotic plants to root pathogens. Cysts of soybean cyst nematodes, which are favored by high pH soils, are often found on plants showing IDC symptoms.

If you suspect you have IDC:

It is best to submit both healthy and affected plants and soil samples from both the affected and healthy areas of the field.

Research indicates that the following variables are associated with IDC problems.