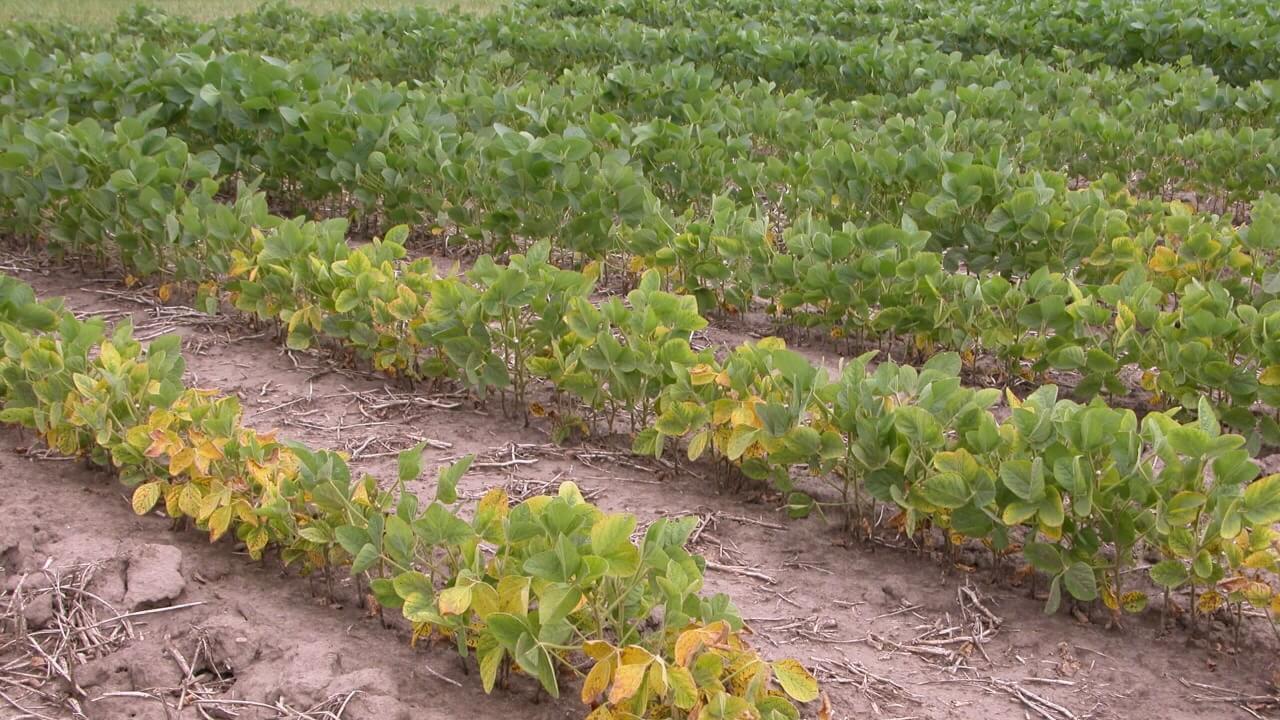 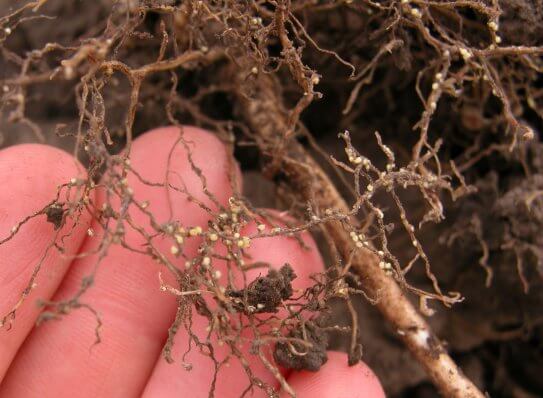 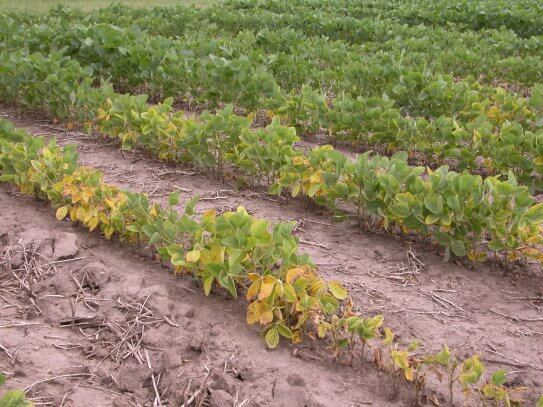 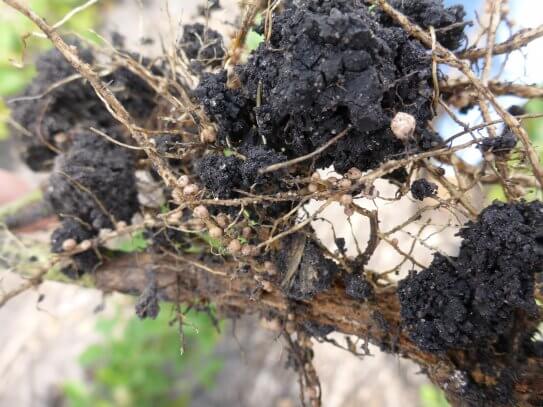 The life cycle of SCN has three major stages: egg, juvenile, and adult. The life cycle can be completed in 4 weeks under ideal conditions (soil temperatures at or above 75° F).

Up 50% yield loss can occur because plants are producing fewer pods than they should. The effect of SCN on soybean yield is directly related to the numbers of nematodes feeding on the root system.

Above-ground symptoms
Visible symptoms can include stunted plants, mid-season yellowing, and premature senescence. However, symptoms of an SCN infestation are not always visible above-ground.

Injury usually is more severe in light, sandy soils and in dry growing seasons, but it also occurs in heavier soils and growing seasons with average to above-average rainfall. SCN damage is not always confined to smaller areas within a field. When fields are infested with SCN throughout, areas of stunted plants are not obvious.

Below-ground symptoms
Root symptoms of SCN often go unrecognized. It is difficult to recognize if roots are stunted and have fewer nodules unless they are compared to uninfected soybean plants. Symptoms of SCN infection include:

At various times since these initial discoveries, maps were created of the counties in the United States and Canada that were known to be infested with the nematode. Recently, nematologists, plant pathologists, and state plant regulatory officials in the soybean-producing areas of the United States and Canada were surveyed to update the map of the known distribution of SCN in 2020.

SCN now has been found in every soybean-producing state in the United States except West Virginia. Since the last update of the map of the known distribution of SCN in the US in 2017 (shown below), SCN was discovered for the first time in 32 new counties in 11 states, namely Kansas, Kentucky, Michigan, Minnesota, Nebraska, New York, North Carolina, North Dakota, South Dakota, Virginia, and Wisconsin. 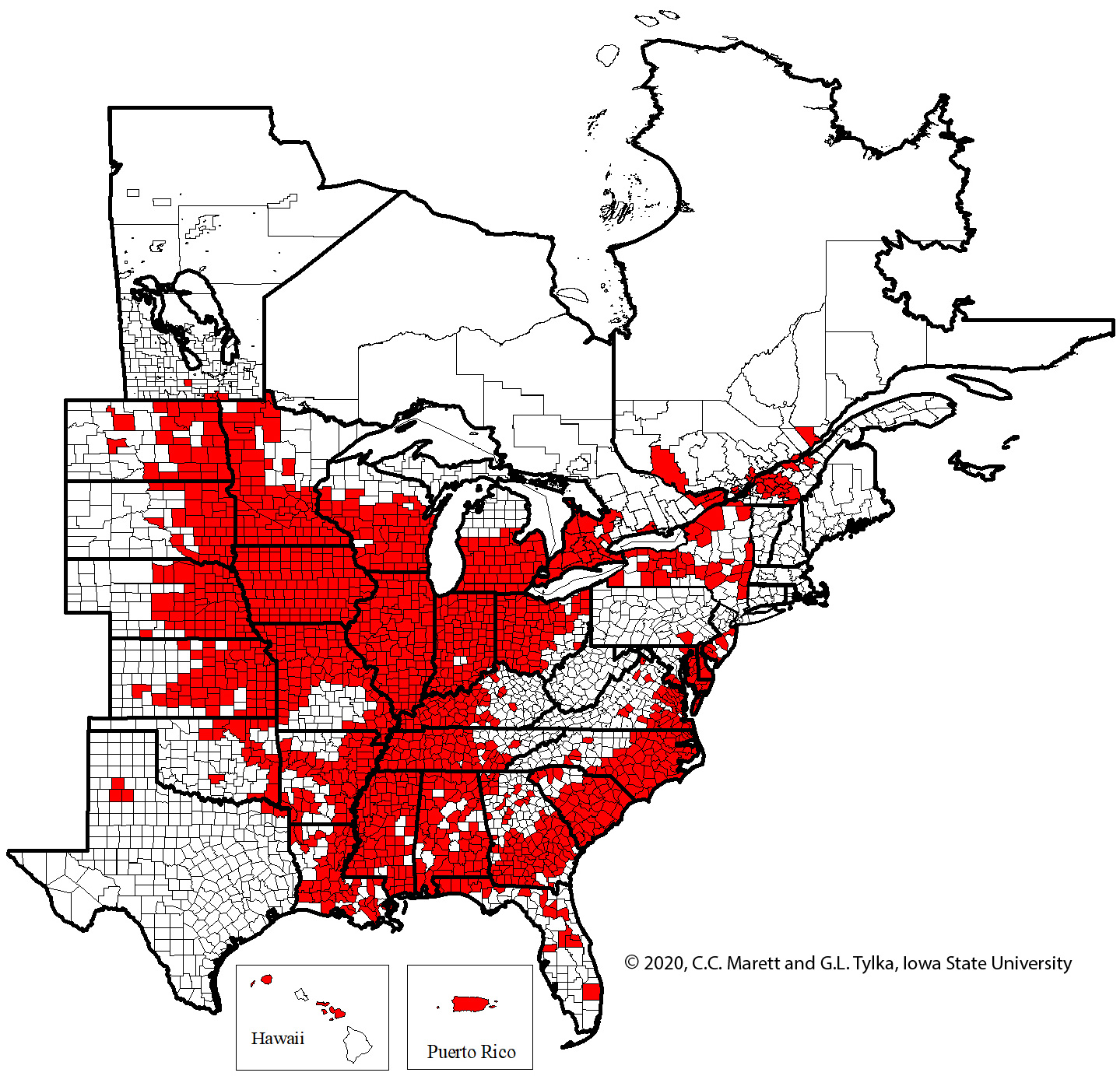 Are you scouting to…

Look for SCN in stunted or yellow soybeans observed in mid-season, OR in fields that are apparently healthy, but have not yet been checked for SCN? Examine soybean roots

1. How to choose SCN-resistant soybean varieties

Wise selection of varieties will ensure that soybeans can be grown profitably in SCN-infested fields for many years to come.

Crop rotation and planting SCN-resistant varieties are the two most important strategies for SCN management. Sample fields to determine SCN population densities — preferably before buying soybeans for the next season, but certainly before planting soybeans. Visit TheSCNcoalition.com for state-specific SCN management information.

Year 3 – SCN-resistant variety different than the one planted in Year 1.

Year 5 – SCN-resistant variety different than the ones planted in Year 1 and Year 3, or susceptible soybean.

Thus, it appears that most cover crops will not serve as inadvertent hosts for SCN. The one exception is the winter annual weed pennycress, which currently is being studied as a possible oilseed crop. Ohio State University researchers have reported that pennycress supports the productions of hundreds of SCN females per root. So pennycress should not be grown as a cover crop in SCN-infested fields.

Cover crops may reduce nematode population densities as an added benefit — but the effects on SCN have been inconsistent. For example, a University of Illinois study published in 2017 reported that canola, cereal rye, and rapeseed reduced SCN population densities when grown as cover crops, but only in 25% to 33% of the experiments.

Seed treatments
There are many nematode-protectant seed treatments available for soybean farmers to use to help manage SCN, and they have a wide range of active ingredients and modes of action. The seed treatments can reduce SCN yield loss by providing early season protection against SCN feeding but they rarely result in decreased SCN population densities at the end of the growing season. Nematode-protectant seed treatments can provide some protection against yield loss with SCN-resistant soybean varieties that are being increasingly fed upon by SCN populations that have developed increased SCN reproduction on the very commonly used PI 88788 source of resistance.

HG Type tests
Soybean varieties that are resistant to SCN have been available to Midwestern soybean farmers since the early 1990s. When working effectively, these resistant varieties suppress 90% or more of the development of most SCN populations, resulting in a significant increase in soybean yields in SCN-infested fields.

In 2002 a new system, called the HG Type test (“HG” for Heterodera glycines, the scientific name for SCN) was developed and has been adopted by agronomists, plant pathologists, and soybean breeders.

What is a SCN HG Type test?
A HG Type test is a greenhouse test performed on a SCN population isolated from a field to determine how well the SCN population can develop on soybean lines used as sources of resistance for SCN-resistant soybean varieties.

How is a HG Type test conducted?
To determine the HG Type of a SCN population, the nematodes are grown on soybean lines with different genes for SCN resistance in the greenhouse under controlled conditions (Figure 1). These conditions are similar to those under which resistant soybean varieties are developed.

How do I interpret the results of a HG Type test?
The number or numbers in the HG Type designation correspond directly to sources of resistance used in available SCN-resistant soybean cultivars.

For example, a SCN population of HG Type 1.2 indicates that the nematode population has elevated development on Peking (line #1) and PI88788 (line #2). Either or both lines have been used to breed some SCN-resistant soybean varieties. A grower with a field infested with an HG Type 1.2 might not want to plant SCN-resistant varieties that contain resistance from Peking or PI88788, if possible. Facilities that provide SCN HG Type testing should also offer assistance in interpreting the results of the test.
Examples of HG Type Testing»

With the HG Type designation, we label the nematodes, not the varieties. For example, if a grower’s SCN population is an HG Type 2, the name clearly indicates that the nematode exhibited elevated development on PI 88788 (line #2). That makes it more likely that the nematodes could develop on any SCN-resistant variety that obtained its SCN resistance from PI 88788, and it likely would be in the grower’s best interest to use a SCN-resistant variety that obtained its SCN resistance genes from a source other than PI 88788, if possible. Examples of HG Type Testing

For more information about SCN, visit our resource library

Information on this disease provided by Crop Protection Network and by G.L. Tylka, Iowa State University. 5/2020