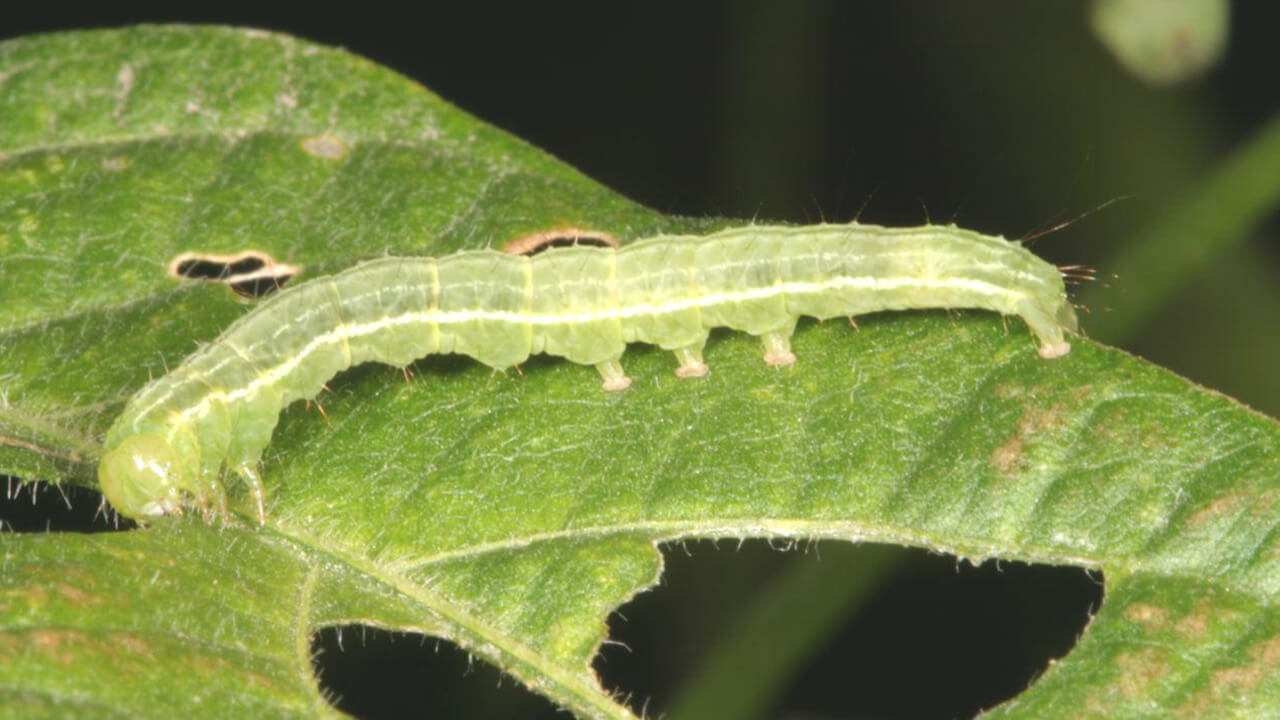 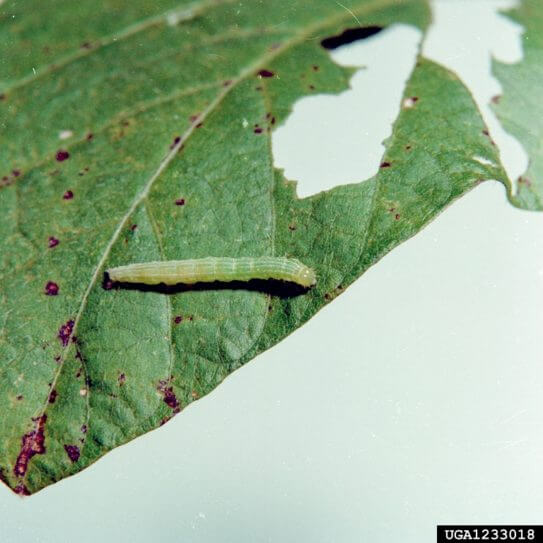 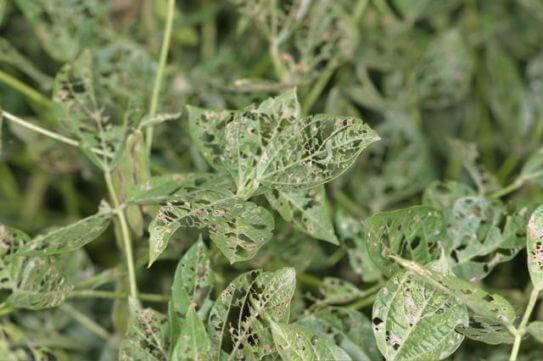 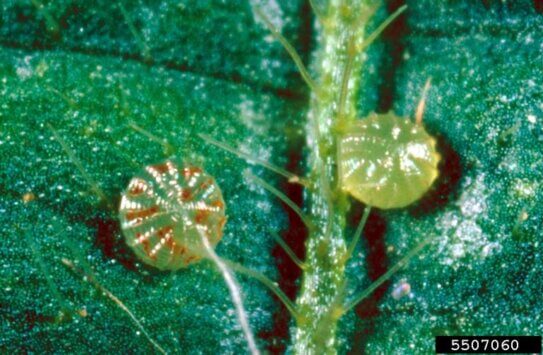 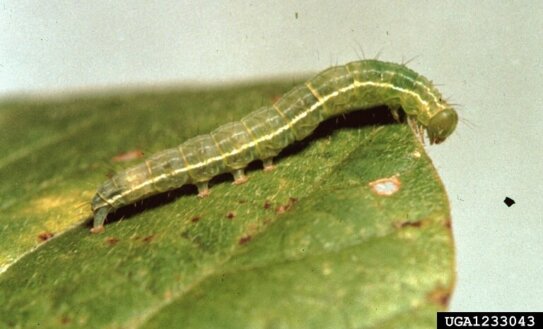 The green cloverworm (GCW) (Hypena scabra) has a broad distribution and is found in most soybean growing areas of the United States and southeastern Canada. Green cloverworms are mostly found on legumes, with alfalfa and soybean the preferred hosts. Other hosts include dry beans, clover, cowpea, vetch, and many common weeds. In soybeans, they are present from late June through September. Two or more generations may occur each year. Although common in soybean fields, especially in the southern states, GCW is generally not considered a serious pest.

Identification
This caterpillar is often mistakenly called a looper, but differs in that it has four abdominal prolegs in contrast to three for loopers.

This insect spends the winter as a pupa or adult in leaf litter or just under the soil surface. In the spring, adults lay single eggs on soybean leaves.

Newly emerged larvae are pale yellow and eventually turn light green in color. They have a narrow white stripe on each side of their body and four pairs of prolegs. A unique larval characteristic is their brief jumping and flopping activity that occurs when disturbed; no other caterpillar in soybeans exhibits this behavior.

Damage to soybeans is caused by the larval stage which hatches in early summer. Young larvae feed on soybean leaves and skeletonize the underside of the leaf. Older larvae eat all of the leaf except large veins. Green cloverworms feed mainly on the top third of the plant, giving the impression of extensive damage long before economic damage has occurred. Feeding by the GCW, although it can be extensive, does not generally affect yield due to the ability of the soybean plant to compensate for leaf loss. 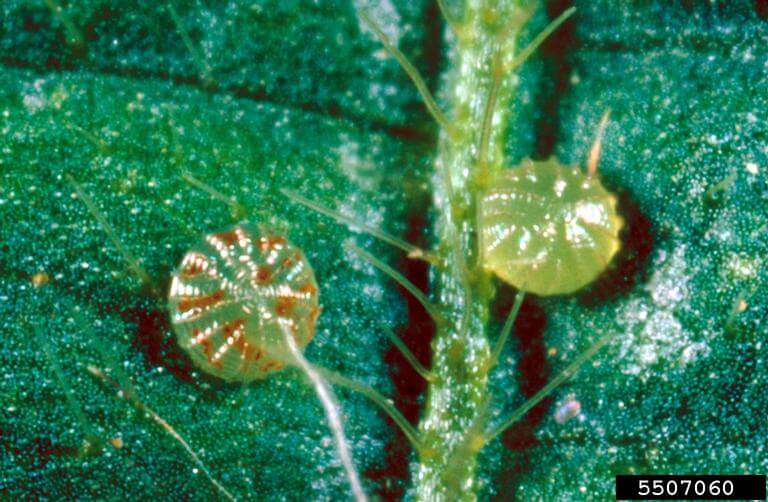 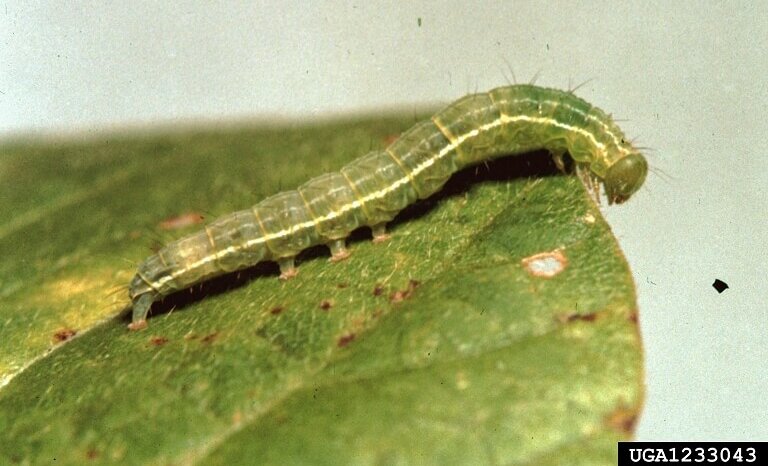 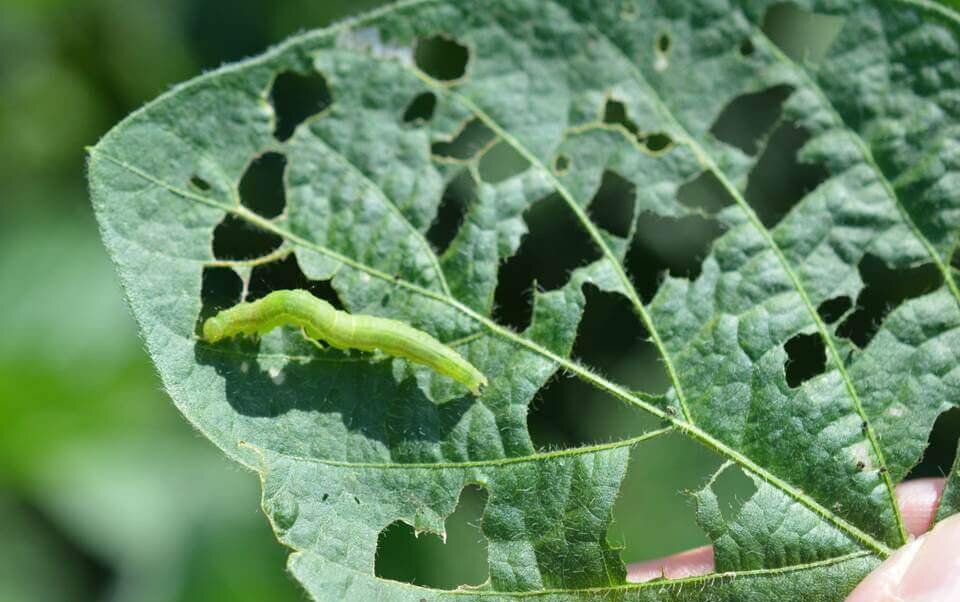 Sampling Method
Adults are dark brown moths that are not easy to identify without training. They can be captured using pheromone baited traps and this may give early warning of their presence.

If defoliation levels indicate that further sampling is necessary and numerous GCW are present in the field, take 20 sweeps with a sweep net in each of 5 field areas. Alternatively, use a shake cloth to sample. At several locations in the field, place the shake cloth on the ground between two rows and shake the soybean plants over the cloth. Shake two feet of row on each side of the cloth. Record the number of (healthy) worms at each site. Once you have visited several locations, average the numbers you collected at each site. An average of several sites will provide you with a better estimate of what is happening in the whole field. You may also want to estimate the percent defoliation on the plants. This can also be used as a measure of damage.

Treatment decisions are based on a variable threshold scheme. Control is not needed if there are fewer than 12-13 worms per row foot. When the population size reaches this level you will still need to consult the threshold table (Table 1) because usually it takes a great many more worms than this to be of economic value.

The GCW is considered a good food source for a number of predatory insects. In parts of the deep South, GCWs are ignored or are sometimes considered beneficial because low populations are thought to serve as a food source for predators that later help hold more serious defoliators in check.

Dense cloverworm populations and moist conditions help encourage epidemics of a fungal pathogen that can eliminate even threatening populations in a few days, without the use of insecticides. The epidemic spreads from mummified remains of parasitized larvae on the ground or up in the foliage. Large numbers of spores are released from the dead cloverworm larvae and infect other nearby larvae, frequently leading to a total population crash in a period of days.

Thresholds
Reductions in yield from insect feeding can occur during any crop stage, but the pod-forming and pod-filling stages are the most sensitive. Many entomologists recommend using leaf defoliation as the best gauge for making management decisions, especially in fields with multiple insect species feeding on the leaves.

Determine the percentage defoliation level for individual plants in each sampling area of the field (See Figure 1) and estimate the average percentage defoliation level for the field as a whole. Also note any parasitized or diseased larvae found while moving through the field. These data will give a clue as to whether the population is being significantly impacted by these natural controls. Additionally, record other foliage feeders (e.g., bean leaf beetle, Japanese beetle, etc.) that are captured in the sweep net samples. 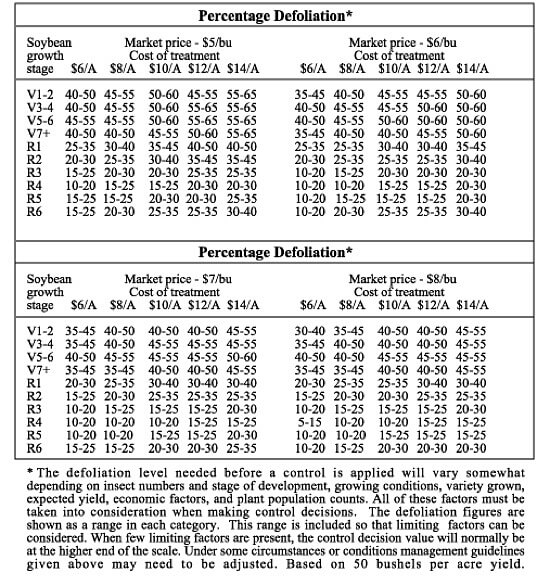 In general, consider treatment of soybean only if leaf-feeding insects are present and defoliation reaches 20% in the pod-forming and pod-filling stages.

If Insecticide control is necessary, contact your state Cooperative Extension Service for recommended products and rates. Always read and follow directions on the product label.