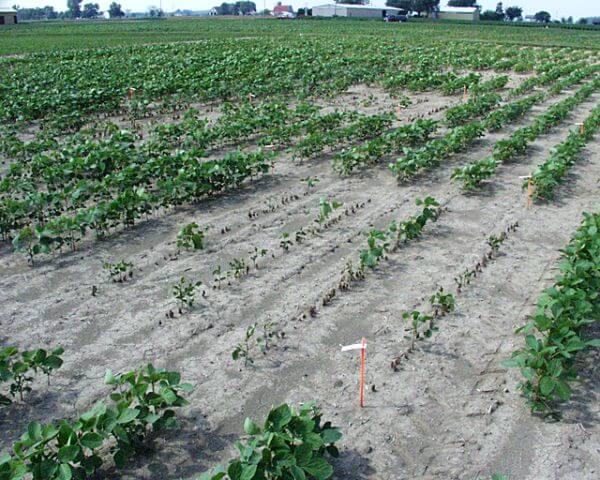 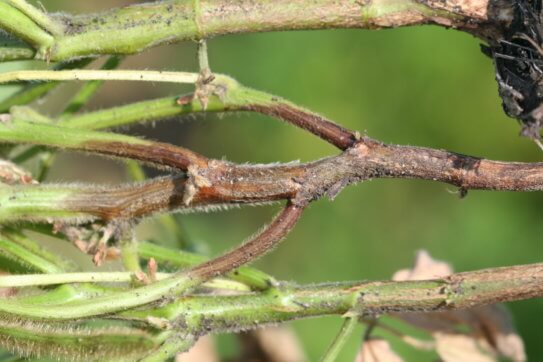 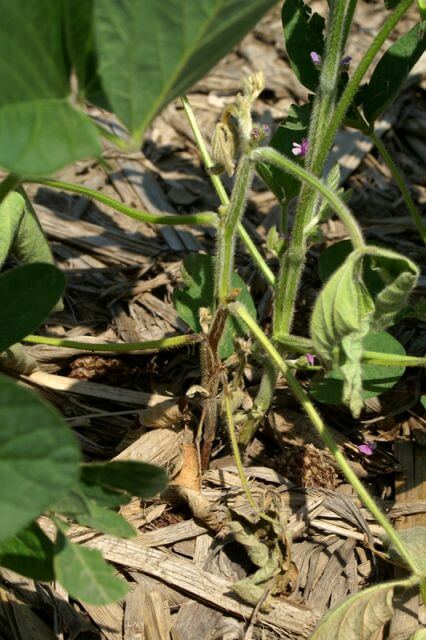 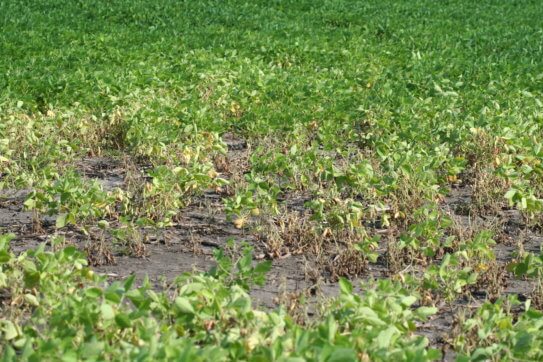 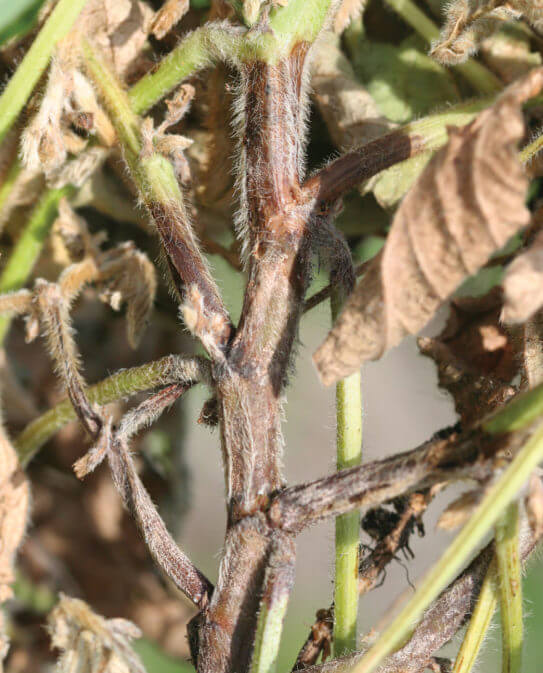 Phytophthora sojae is one of the most destructive soybean pathogens in the northern growing regions and a major cause of stand establishment problems. Seeds and seedlings can be infected and killed at any time after the seed has absorbed moisture.

The disease cycle is adapted to saturated soil.
Phytophthora root and stem rot has a disease cycle unique to fungi that are adapted to saturated soils. Towards the end of the disease cycle, the organism produces reproductive structures called oospores that can survive for many years in the soil after plant residues decompose. Oospores germinate when soil moisture is high. Germinated oospores then produce sporangia, another type of reproductive structure. Sporangia release tiny, swimming spores, known as zoospores, that are released when soils are flooded or saturated. Soybean seeds and young roots produce chemicals that are released into the soil and serve as an attractant to the newly released zoospores.

For disease scouting, you are most likely to find the disease in the following places:

Damping-off phase
Where soils are saturated by heavy rains following planting, scouting can begin as early as plant emergence. Where gaps in the row appear, carefully dig down to the seed zone. Infected seeds may rot before germination. Others may germinate but fail to make it to the surface. In other instances, the plants may emerge from the soil and then die. These dying or dead plants often show a “pinching” of the stem just at or slightly below the soil line. This symptom is commonly referred to as “damping-off”.  Keep in mind, it is difficult to distinguish Phytophthora root rot from Pythium root rot at this stage. Both diseases cause damping-off and a rotting of the young root system.  Generally, Pythium is more active in cold soils and Phytophthora more active in warm soils. Recent research, however, has shown that some Pythium species from the more southern area of the growing region are adapted to causing disease in warmer soils.

Stem and root rot phase
If damping-off is a problem in the spring, be on the lookout for Phytophthora infection following rainy periods later in the season. The stem rot phase is easily recognizable by the presence of a distinct chocolate-brown lesion moving up the stem from the soil line. Initially, the upper stem of the plant may remain green, but eventually the plant will wilt, turn yellow and then die with leaves remaining attached.

Soybean stem canker can sometimes be confused with the stem rot phase of Phytophthora. It produces slightly sunken dark cankers at the nodes. Typically, the stem remains green between the nodes, but in severe instances, the cankers may completely girdle the stem and enlarge to the point where there is little green tissue visible on the stem making it hard to distinguish between the two diseases. An identifying diagnostic feature between the two diseases is that roots of stem canker infected plants will still look healthy.

The root rot phase of Phytophthora is not as readily recognized as the stem rot phase. Infected plants can be stunted and less vigorous, although this is hard to spot unless the infected plants are near a healthy comparison. A close inspection of the root system will reveal a significant reduction in the number of secondary roots and fine root hairs that help the plant take up moisture and nutrients. Plants with the root rot phase may mature a week or two earlier than healthy plants in the field.

Phytophthora root and stem rot can affect soybeans at any stage of development but is often most damaging when it occurs early in the season.

Risk factors for Phytophthora losses are:

Plant resistant varieties
Variety selection is the key for managing Phytophthora. There are two different types of genetic resistance available in soybean varieties.

Single-gene resistance is a complete resistance to a specific pathotype (formerly known as race) of P. sojae, in which the fungus is unable to colonize the plant tissue. Many soybean varieties have resistance genes. The most common group of genes are known as Rps genes (“Resistant to Phytophthora sojae”). The most common Rps genes that are available include Rps1a, Rps1c, Rps1k, Rps3a, and Rps6, or a combination of one or more Rps genes. This information is usually available in seed catalogs and in state variety evaluations.

In fields with known Phytophthora problems or conditions that would favor disease, the current recommendation is to always choose a cultivar with the best levels of partial resistance available in the desired maturity group. Partial resistance will not eliminate Phytophthora, but it may delay disease onset. Select a cultivar based on which specific resistance genes are known to be effective in your region.

Monitor the performance of the Rps genes
Growers should monitor the performance of the resistance package of the soybean varieties they choose. If optimum disease conditions for Phytophthora infection occur during the growing season, scout those areas of the fields to look for stem rot development. If many plants with Phytophthora stem rot are found, make a note to choose varieties with a different Rps gene and higher levels of partial resistance for the next season.

Phytophthora is known to adapt to the Rps genes of soybean varieties, but it’s a slow process. Careful monitoring of plant performance is all that is needed. If many plants with Phytophthora are found when optimum disease conditions occur, this may indicate that a new pathotype has become dominant in your field.

Use seed treatments
Partial resistance to P. sojae is not effective until the seedling is established. Fungicide seed treatments can provide some effective early protection for those fields where P. sojae has been a continuous hurdle. It is best to use a class of fungicide specific for Oomycete diseases. Look for products with active ingredients including metalaxyl, mefenoxam, ethaboxam or oxathiapiprolin.

Rotate crops
Crop rotation prevents the rapid build-up of inoculum but will not eliminate the disease or eradicate Phytophthora because the oospores can survive in the soil for long periods of time. Planting soybeans year after year, however, can increase the Phytophthora oospore population in the soil and promote the development of new pathotypes. Under high levels of inoculum, the effectiveness of partial resistance declines.

Phytophthora root and stem rot on soybean, University of Minnesota, 2018.