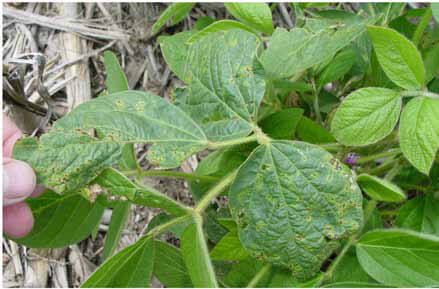 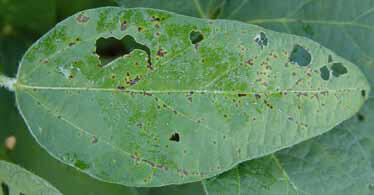 Bacterial pustule is a soybean disease caused by the bacterium Xanthomonas campestrispv. glycines. Athough the bacteria is common in the Midwest, it is of minor importance because of the high level of resistance in most commercial soybean varieties. Bacterial pustule can also infect snap beans.

Because this pathogen produces a pustule, it resembles a rust disease. To someone who has not seen soybean rust before, they may assume it to be soybean rust. This is probably the most commonly confused disease with soybean rust.

The pustules look similar to those caused by soybean rust. However, bacterial pustules will not have a natural opening in the pustules, or masses of spores like those of soybean rust. These features can be seen under magnification of 20X or higher.

Xanthomonas bacteria overwinter on unburied crop residue and on seeds. The bacterial cells are spread during the season by wind-blown rain, rain splashing up from the soil, and during field work when the canopy is wet. The bacteria enter the plant through natural openings and wounds.
.
Unlike bacterial blight, which develops best in moderate temperatures of 70 to 80° F., bacterial pustule develops best during very warm temperatures of 85-90° F., as long as conditions remain wet.

Research studies have reported yield loss potential for this disease to range from 4% to as high as 35% under extremely favorable conditions, but bacterial blight rarely reaches high levels of severity in the Midwest. Severe infection may causes some defoliation of young leaves.

Symptoms begin as small, light green spots. Light-colored raised blisters (pustules) often develop in the center of lesions on both the upper and lower surface of leaves. The lesions can grow together into large, irregular patches of dead tissue. Loss of tissue in the infected areas may give the leaves a ragged appearance. Small raised spots may also develop on pods.

Plant resistant varieties and use pathogen-free seed to prevent bacterial pustule. Rotate soybeans with non-host crops. Plowing and residue management may be beneficial in fields where bacterial pustule is common. Avoid field cultivation when the foliage is wet.

Foliar fungicides will not affect bacterial pustule because it is caused by a bacterial pathogen, not a fungus.