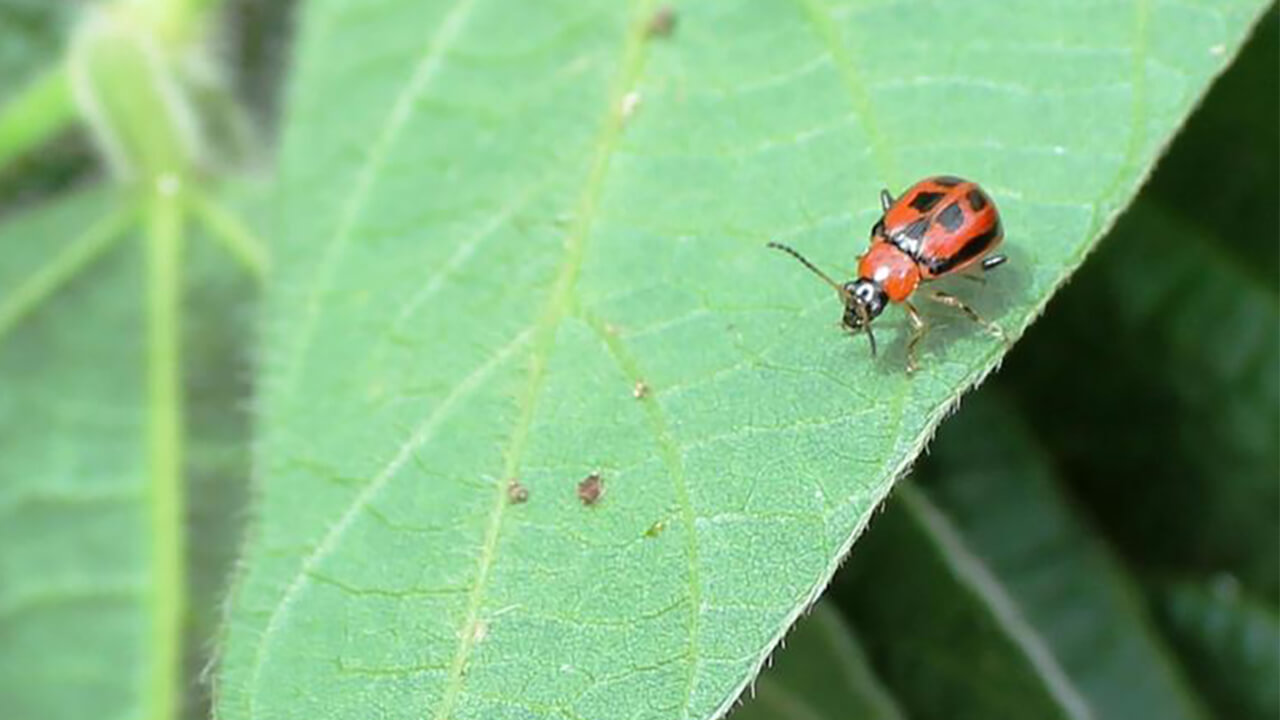 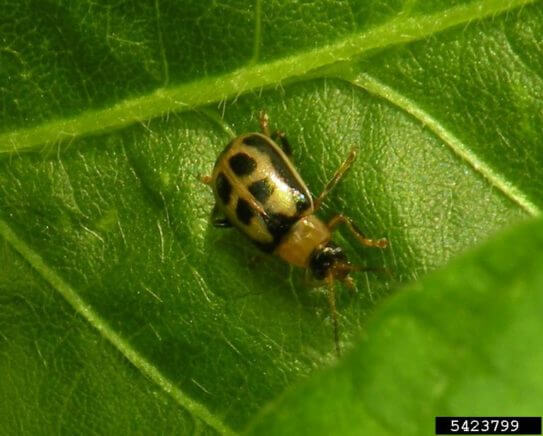 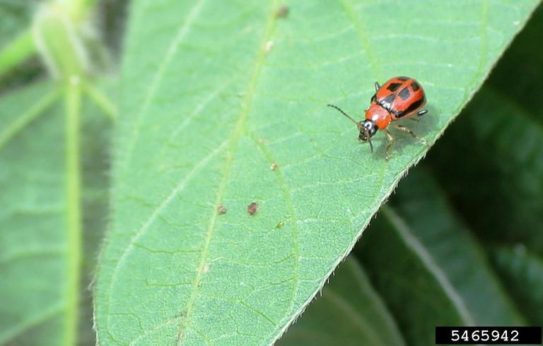 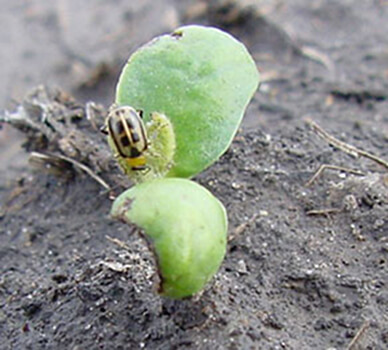 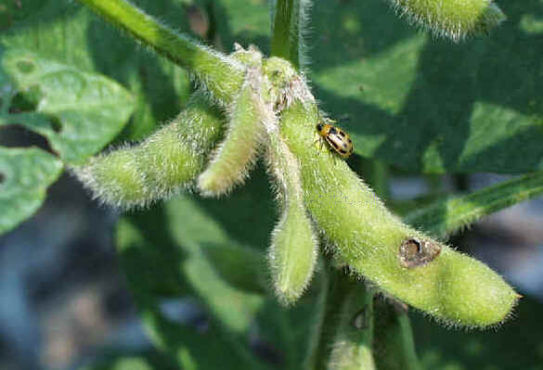 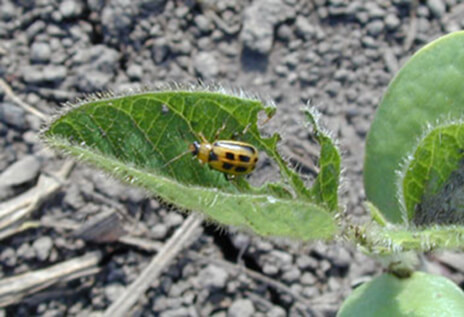 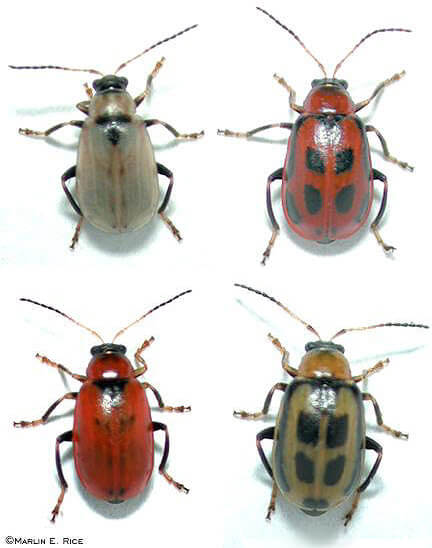 The bean leaf beetle (BLB) (Cerotoma trifurcata) is a common soybean pest that feeds on cotyledons, leaves, and pods.

The trend to milder winters in the past decade is favoring the greater survival of overwintering adults. Growers are also planting soybeans earlier than ever and the combination of the two is increasing the potential for early season damage.

Early planted soybeans and especially the first fields to emerge in an area is where seedling feeding injury by overwintering beetles is most likely to occur. Feeding injury is recognized by small round or oval holes on soybean leaves. Early season feeding by BLB seldom results in economic yield losses as seedlings usually recover.

A second population peaks during the pod-fill stages, however, and feeding by this population can cause extensive damage to pods, seed yield, and seed quality. Complete pod loss can occur when adults feed at the base of the pod. This type of injury is referred to as “pod clipping.” Feeding on the outer pod wall leads to pod lesions and seed damage. Damaged pods are also more susceptible to rotting and discoloration by late season fungal diseases such as pod and stem blight.

Bean leaf beetles can transmit viruses
In addition to the physical injury to the plant, BLB are known to transmit bean pod mottle virus (BPMV) from plant to plant as they feed. Overwintering adults and the first generation can bring BPMV into the field from weedy alternate hosts and the second generation can spread it further into the field. Early season infections may have a greater impact on yields than later season infections.

Adult beetles overwinter under leaf debris adjacent or near soybean fields. Once they become active in the spring they will feed on wild legumes, alfalfa and clovers.

When soybeans emerge, they leave these alternate hosts and concentrate on soybean. They feed on emerging seedlings and deposit eggs in the soil near the plants. These overwintering adults generate the first generation of bean leaf beetles.

The adults eventually leave soybean and return to feed on alfalfa and other legume hosts before seeking overwintering sites under crop residue and leaf debris in fence rows and wood lots.

Periodic inspection of early planted fields is advised, especially if the field in question is the first to emerge in the area. A heavily infested field may serve as a trap crop attracting many beetles to a single location and providing an opportunity for early control of a potentially injurious BLB population. Although economic injury is relatively rare at this time of the season, severe leaf feeding can cause significant damage and should be stopped if defoliation goes over 50%, plants are being stunted, and beetles are still actively feeding.

In late June and July, when the first generation of BLB adults begin to appear, periodic sweep net sampling for determination of BLB population abundance should be initiated plus periodic assessment of defoliation injury. Sweep net sampling should be taken as sets of 10 sweeps at 3 to 5 locations in a field. For defoliation assessment, 20 random plants should be pulled from the soil and an estimation of the percent defoliation made. Care should be taken to estimate the percentage over the entire plant, not just the top third. Often the level of defoliation is much higher on the top portions of the plant, with relatively little on the lower two-thirds.

Second generation feeding will be occurring simultaneously with other defoliating pests including Japanese beetle, cloverworms, soybean loopers, grasshoppers, etc. Rescue treatment is justified when defoliation for all pests exceeds: 40% prior to bloom, 15% from bloom to pod-fill, and 25% after pod-fill to plant yellowing.

Bean leaf beetle adults are about ¼ inch long and can be yellow, tan, or red in color. The adult is distinguished by a distinct black triangular mark on its wing covers directly behind the thorax (the “neck” area of the insect). Often two black spots are present on each wing cover and a distinct black band extends around the outer edges. Sometimes the wing covers have no markings, except for the black triangle (figure 1). 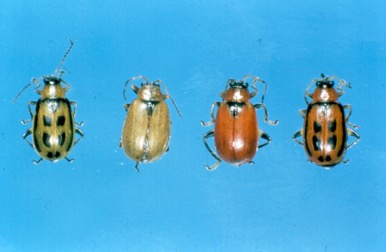 When the decision to make a rescue treatment is made, there are numerous foliar insecticides to use. When applying a treatment for prevention of further pod feeding in late summer, growers should be aware of pre-harvest intervals for many of the insecticides, which range from 14 days to 60 days. The time period left before anticipated harvesting of a field might dictate the insecticide chosen.

The approach of controlling BLB for reducing the incidence of BPMV to an economic level is questionable, and is still being researched. If BPMV is a concern, a two-pronged approach is needed, one aimed at the overwintering population and the other at the first generation. An initial insecticide application should be made against overwintering BLB as soon after crop emergence as possible when BLB adults are first noted. A pyrethroid insecticide should be used because it offers longer control against new adult insects that might arrive at a later date. Whether an insecticide seed treatment can control overwintered beetles in the spring in place of the first foliar application is debatable, but may be worth attempting. A second insecticide application, again with a pyrethroid insecticide, should be made at first sign of the first generation in July. Keep in mind midseason insecticide applications may be harmful to predatory insects and cause flare-ups of other pests including two-spotted spider mites. For product and rate recommendations, consult your state Extension office. Always read and follow label directions.