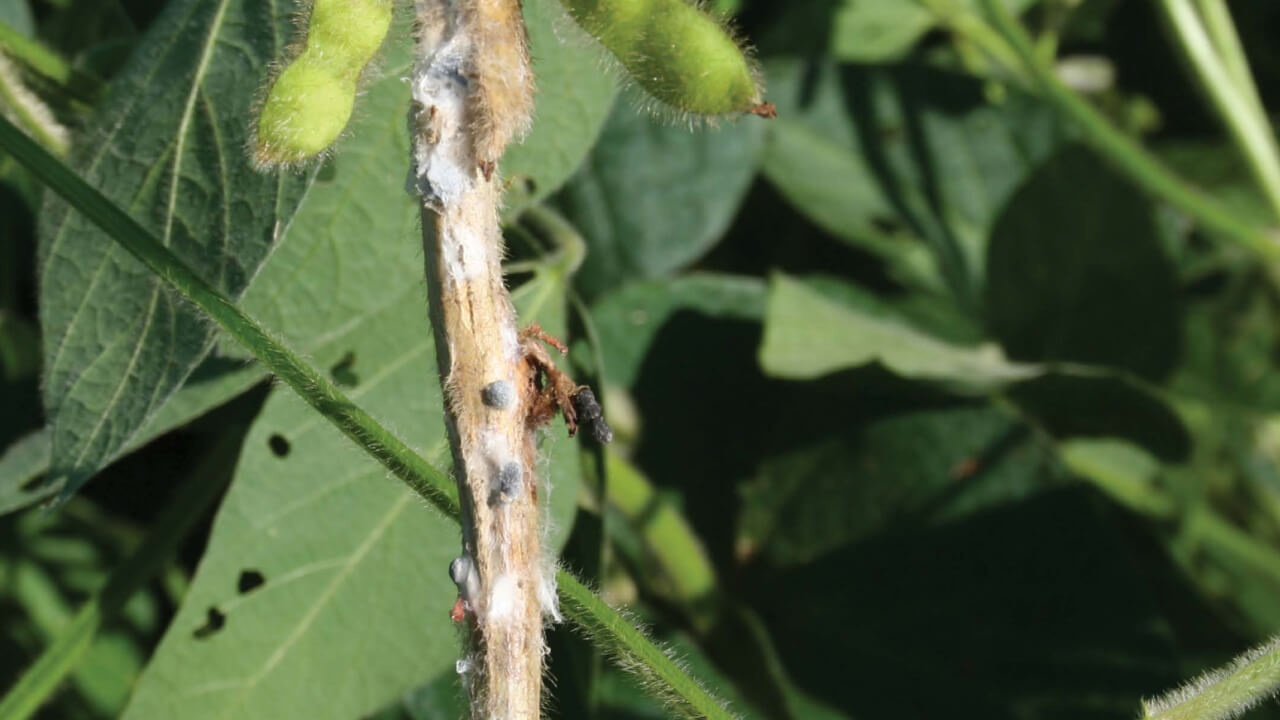 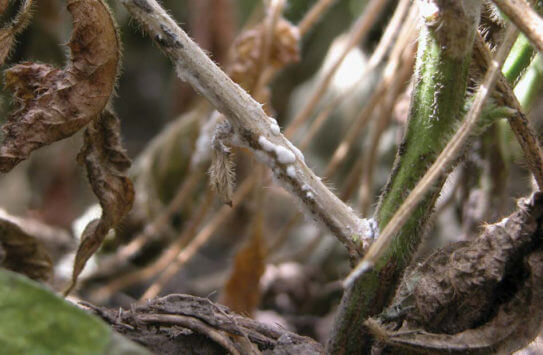 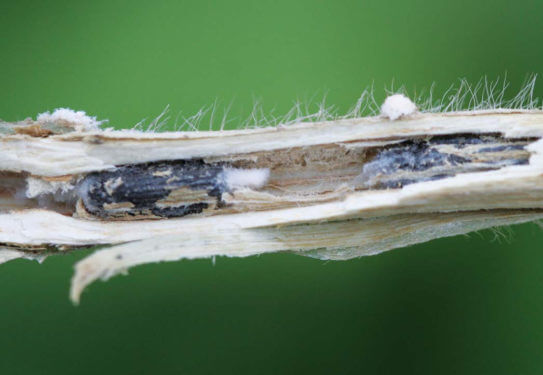 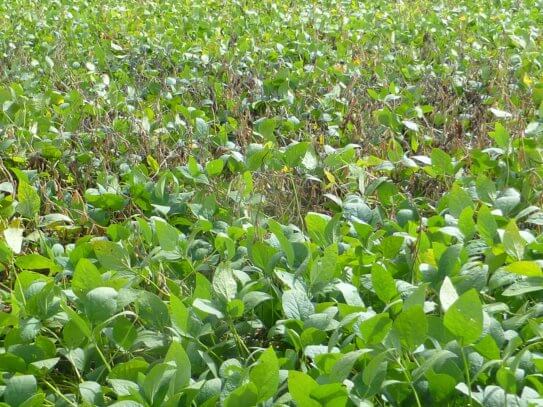 White Mold is a significant disease problem of soybean in the North Central region and Canada. The incidence and severity of white mold varies from year to year because of its sensitivity to weather conditions. Cool and moist conditions at the time of flowering are most conducive to the development of white mold.

White mold was discovered on soybeans in central Illinois in 1948. Although it eventually became a chronic problem in Michigan, Minnesota, and Wisconsin, outbreaks were localized and occurred where soybeans were grown in rotation with other susceptible crops. 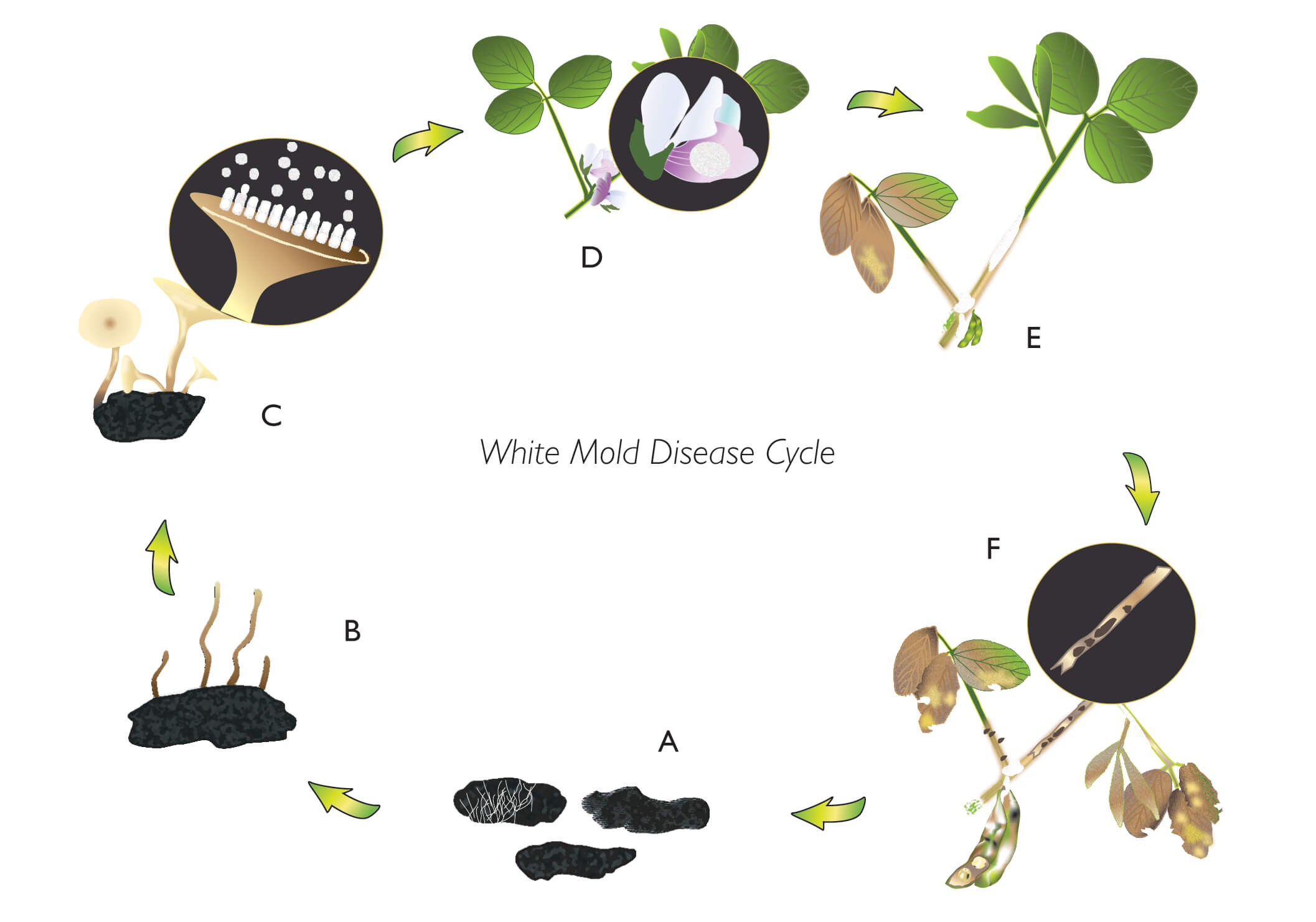 (A) The white mold fungus (Sclerotinia sclerotiorum) survives in the soil as sclerotia — hard, black structures that resemble mouse droppings.

(B) Sclerotia within the top two inches of soil can germinate to produce apothecia. Apothecia are small, tan, cup-shaped mushrooms about 1/8 to 1/4 inch in diameter. Shaded, moist, and cool soil favors germination.

(E) Infection can spread into the stem at the node and is favored by moisture and cool temperatures. A dense canopy during flowering (growth stages R1 through R3) may provide an ideal microenvironment for spore production, dispersal, infection, and disease development.

(F) The fungus eventually girdles the stem and disrupts the transport of water and nutrients. This causes leaves and stems to turn brown and stand erect above the soybean canopy. Closer inspection of the stems may reveal a thick, white mold on the stems and branches. Sclerotia can form either on the inside or outside of infected stems and pods.

(A) The sclerotia fall to the soil during harvesting or remain in crop debris where they survive for many years. In the spring, sclerotia may germinate to form new apothecia, starting the disease cycle again.

The best time to scout for apothecia is at canopy closure. This is generally in late June and early July in the North Central region and will vary with row spacing.

Check the soil under plants growing in high soil moisture areas and closed canopies, especially during flowering. Check areas where moisture collects due to fogs, extended dew periods, and in pockets of poor air drainage.

Scouts should be aware of the difference between apothecia growing from sclerotia and other harmless mushrooms such as the one produced by the birds-nest fungus, growing on pieces of organic matter.

University of Wisconsin researchers have developed a white mold forecasting app known as Sporecaster that uses several variables including weather and the amount of soybean row closure in a field. You will need to scout your field to determine if the soybean crop meets thresholds such as canopy closure and the presence of flowers. For more information on how to use the app, including video tutorials, see “New smartphone app: Sporecaster, The Soybean White Mold Forecaster”.

Check near tree lines or other parts of a field that experience less wind disturbance, parts of the field with thick canopies, and fields with a history of white mold. White mold often occurs in patches within fields. Within these patches, look for scattered dead plants.

Infected plants appear wilted, which might be mistaken for drought. Inspect the stems for water-soaked lesions that progress above and below infected nodes, and eventually encircle the stem.

Look for the distinctive white, cottony, moldy growth and sclerotia on infected plant tissues. These are signs of the fungus that are diagnostic for white mold and allow it to be easily distinguished from most other soybean diseases.

The growth of the white mold fungus is strongly affected by environmental conditions in the crop canopy and is particularly favored by dense soybean canopies.

Rain events during flowering, and wet areas in fields due to fog and extended dew periods are especially favorable for white mold. Risk assessment for white mold is based on these factors, as well as the field history and soybean variety.

Start with record keeping
Taking accurate notes about where and how much white mold occurs in each soybean field is important for future disease management planning. Tracking disease levels across years also will help determine the potential sclerotia (inoculum) load that may be present in a field. Recording disease and yield performance for different varieties will help in future variety selection for fields with a history of white mold.

Variety selection should be based on resistance ratings determined across multiple locations and multiple years. Check with seed dealers and local Extension for variety tests that include varietal responses to white mold. Note that testing conditions and scoring methods vary within the seed industry.