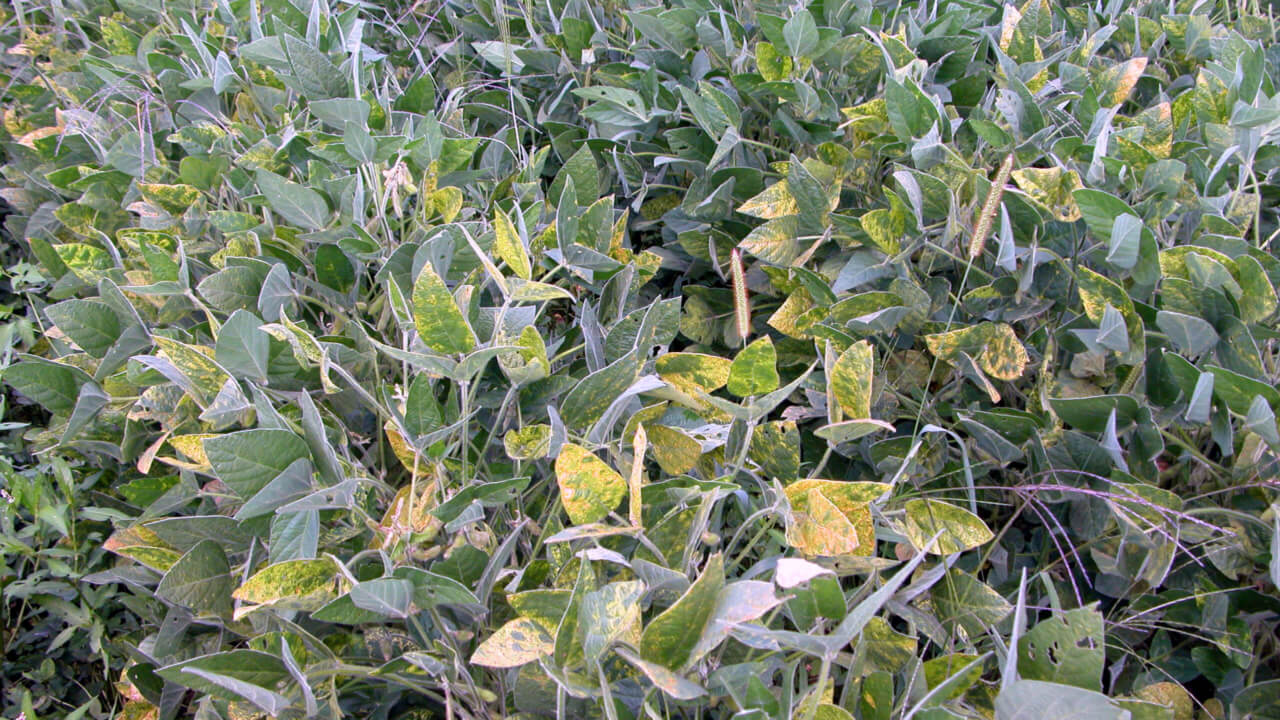 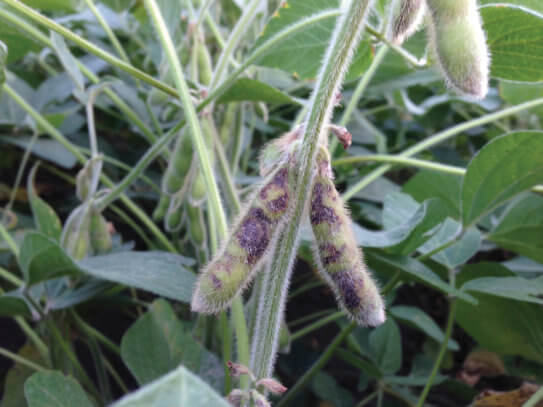 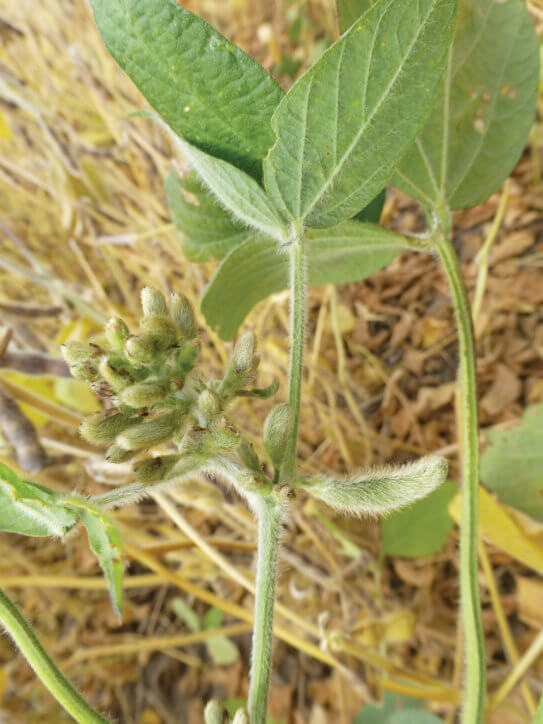 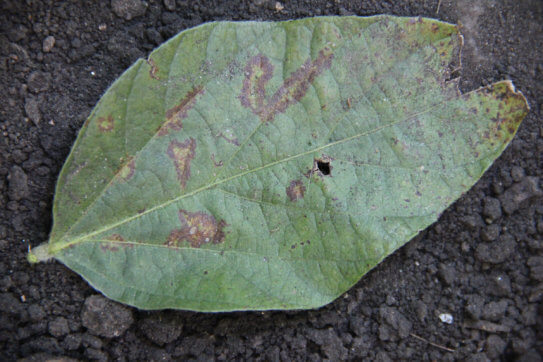 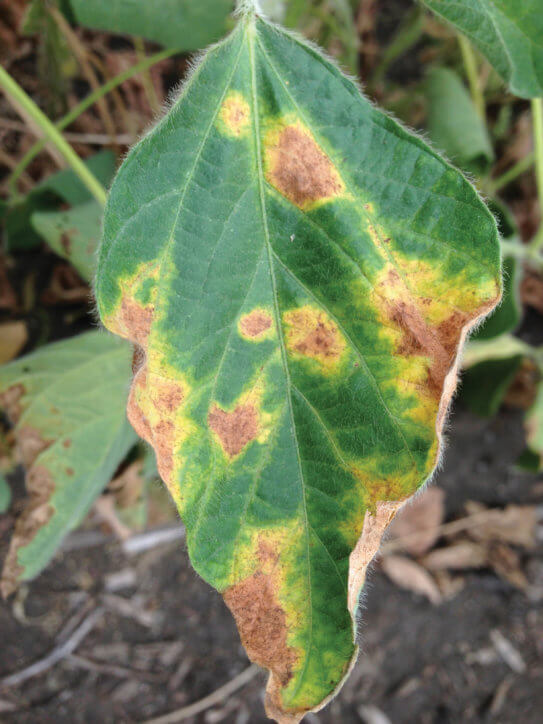 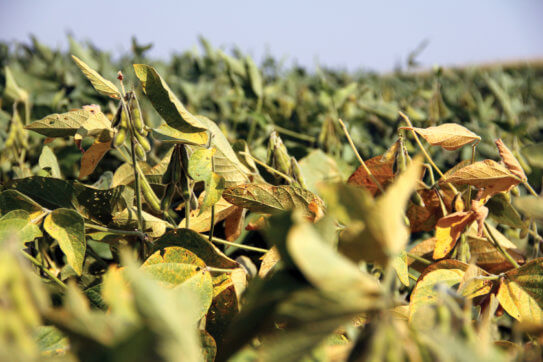 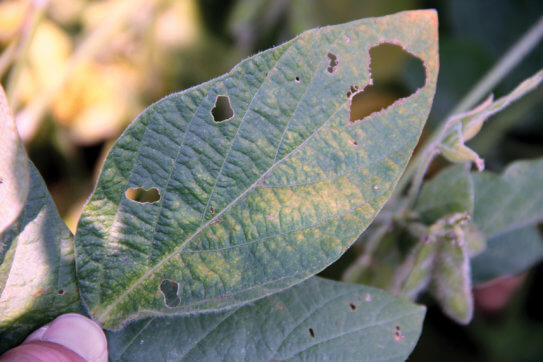 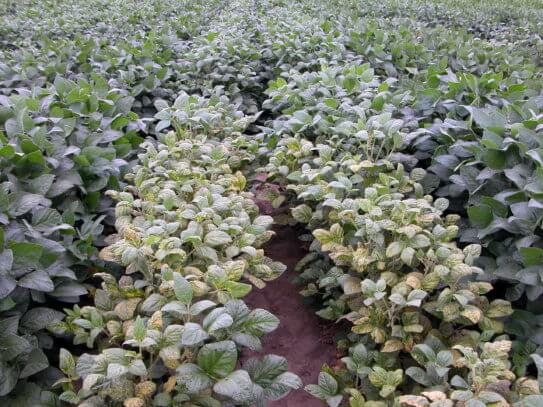 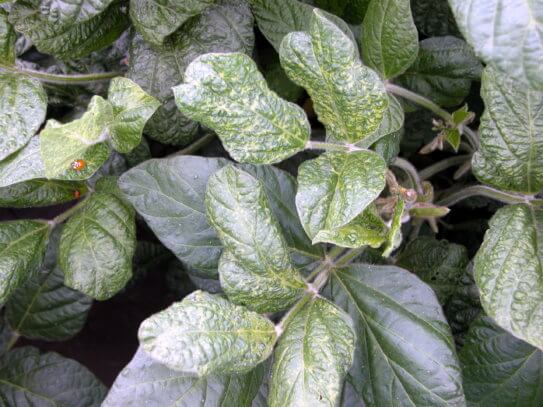 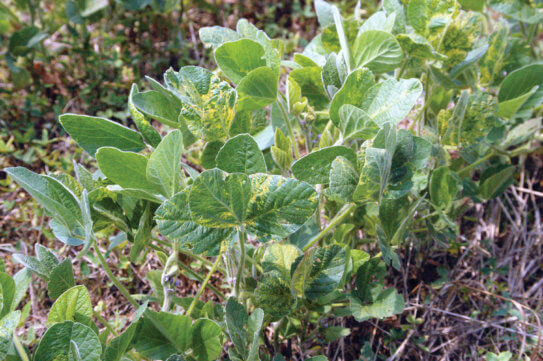 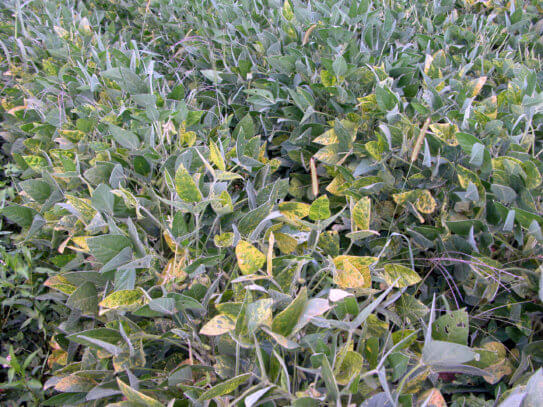 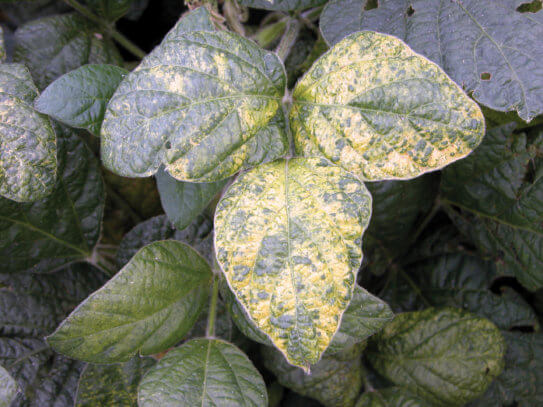 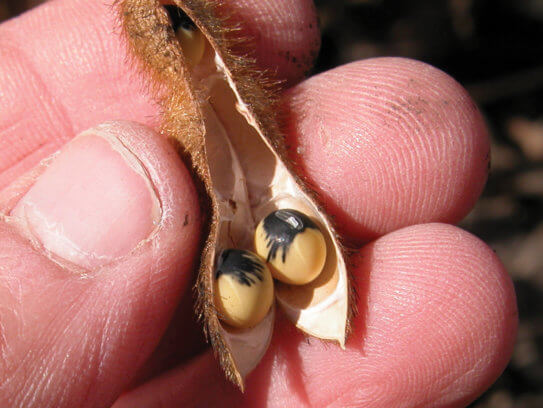 Viruses are submicroscopic particles consisting of strands of either DNA or RNA encased in a coat made of protein molecules that can cause disease in plants. Agricultural plant viruses can grow and reproduce only inside a living plant cell or sometimes in the insect that transmits the virus.

Virus-like symptoms have been increasing in soybean fields in recent years. Mottled, crinkled leaves during periods of rapid growth, mottled seed, and lower than expected yields can be possible indicators of virus infection.

The impact and management of soybean viruses, particularly in the North Central states, is currently an active area of research.

Unlike other soybean pathogens, which are spread by wind, water, soil or plant debris, most plant viruses are spread from plant to plant by specific insect vectors.

The insects that most commonly transmit viruses in soybean are the bean leaf beetle (Cerotoma trifurcata), the soybean aphid (Aphis glycines) other migratory aphid species, and soybean thrips (Sericothrips variabilis). Recognizing the virus as part of a unique plant-insect-virus relationship is the key to effective management.

Viruses have been identified in both symptomatic and nonsymptomatic plants. Sometimes, two or more viruses may be present in a plant at the same time. These multiple infections pose the greatest risk of reduced quality and yield.

Alfalfa Mosaic Virus is transmitted by several aphid species, including the soybean aphid, and through seed. Alfalfa and clover plants in the North Central region are commonly infected with AMV. Symptoms of AMV tend to decrease as the soybean plant matures.

Bean Pod Mottle Virus is the most common and widespread viral pathogen of soybean. BPMV is transmitted by leaf-feeding beetles, primarily the bean leaf beetle. The incidence of BPMV infection in soybean fields can be very high in years when overwintering bean leaf beetle populations are high. Milder winters are thought to be contributing to regular high overwintering populations of the beetle.

Soybean Mosaic Virus is transmitted through seed at rates ranging from 0 to 5% in some commercial varieties, and by several species of aphids, including soybean aphid.

The incidence of SMV infection in soybean fields has been much lower than that reported for BPMV. However, yield losses from SMV infection have been as high as 94%.

When soybean plants are infected with both BPMV and SMV, symptoms can be more severe than infection by either virus alone.

Soybean Dwarf Virus has reportedly caused severe yield losses in soybean in Japan. An Illinois survey detected SbDV in more than 40% of red clover plants sampled and it has been consistently detected in commercial soybean fields in both Illinois and Wisconsin. Although SbDV has been shown to be transmitted by soybean aphids, the SbDV incidence in Illinois and Wisconsin have not been correlated with annual aphid abundance as determined by the North Central Regional Soybean Aphid Suction Trap Network.

Soybean farmers should be aware of a relatively new disease caused by SVNV. The disease has been detected across the United States in both northern and southern growing regions and in Ontario, Canada.

Of the many diseases caused by TRSV on a wide range of hosts, bud blight of soybeans is one of the most severe. In general, the most significant yield loss occurs when plants become infected before flowering.

Tobacco streak virus is transmitted both by thrips and through infected soybean seed. It can reduce yield. Infection can be difficult to detect because the concentration of TSV particles decline significantly as soybean plants mature.

To determine if a virus problem exists in your field, look for the following indicators. Foliar symptoms of virus infection will be most apparent during times of rapid growth and cooler weather.

Be aware that leaf symptoms are not a consistent indicator of virus infection — leaf symptoms can fade as summer temperatures increase and the plant matures. Symptom development can also vary among soybean varieties. Mottled and crinkled leaves can have other causes including herbicide injury and nutrient deficiencies.

The most common symptom of virus-infected plants is that they have fewer pods and tend to remain green after healthy plants around them have matured and dried down. Pods may be flatter and smaller with fewer seeds, Plants may also be stunted to some degree.

Different viruses can cause similar symptoms, and infection by more than one virus is common.

Virus-infected leaves may show a mosaic of light and dark areas of green or yellow. Leaf margins may curl downward. Foliar symptoms of virus infection will be most apparent during the vegetative growth stages when rapid growth is occurring, and temperatures are cooler than normal. Foliar symptoms are sometimes confused with drift injury from growth regulating herbicides such as 2,4-D or dicamba. Viruses associated with mosaic symptoms:

Some viruses can cause young leaves to have a raised, blistered or distorted appearance. Viruses associated with rugose leaves:

Several viruses can cause a mottled black or brown discoloration of the seed. A condition known as bleeding hilum occurs when the seed turns dark brown or black at the point where the seed is attached to the pod.

Symptoms often begin with a yellowing near leaf veins that eventually develops into reddish-brown lesions, causing death of the leaf tissue.

A curving of the terminal bud on the main stem, forming a “shepherd’s crook”.

Fields with the following signs are at most risk from virus infection:

There are no specific recommendations available yet for consistent, effective management of soybean virus diseases.

There are, however, several integrated management strategies that can have some impact on limiting losses from virus infection, depending on the virus or viruses involved:

Although progress has been made in quantifying field tolerance to soybean viruses, information on specific varieties is usually not available. The development of new virus-resistant or -tolerant varieties is an active area of soybean research and plant breeding.

Studies have shown that insecticidal control of vector insects can reduce the amount of feeding damage, but it does not always provide consistent reduction in the incidence of virus infections.

Symptoms of virus diseases look similar. But because of the specific plant-insect-virus relationships involved, effective management requires accurate knowledge of which virus (or viruses) are causing the most prevalent virus problem. Many university diagnostic clinics and some private laboratories  can perform serological diagnostic tests if a virus infection is suspected. Send in green, symptomatic leaves.