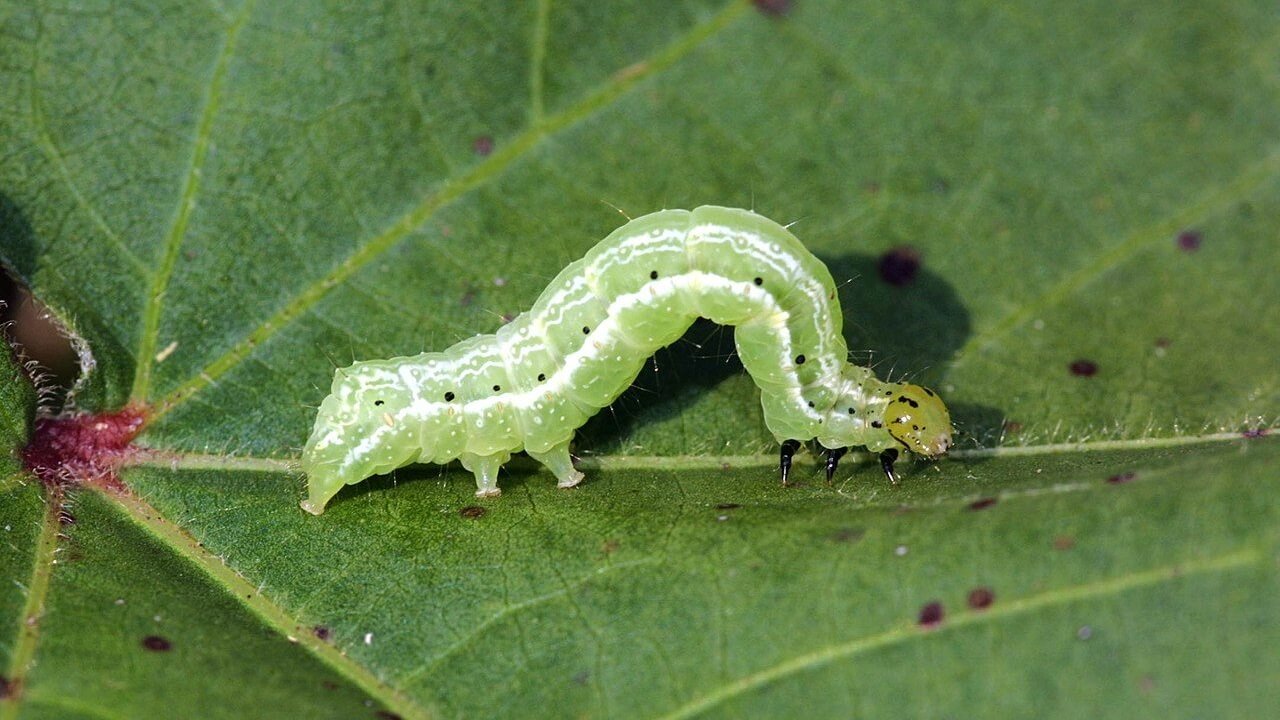 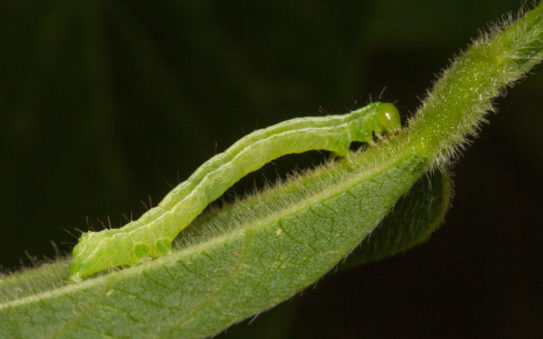 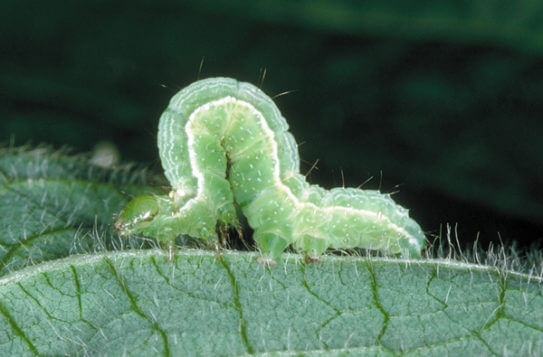 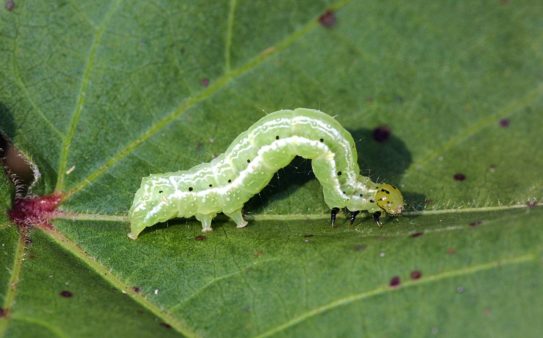 The soybean looper Chrysodeixis includes, is a light to dark green caterpillar that derives its name from its preferred host (soybeans) and its characteristic looping movement it makes while in motion. Although largely a pest of soybean, the soybean looper feeds on many other agronomic, vegetable, and floricultural crops. Larvae (caterpillars) are known to consume large amounts of foliage but rarely feed on pods. This caterpillar has continuous generations in the southern U.S. and overwinters in southern Florida and Texas. It is not known if this insect is migratory, but apparently is carried northward by weather systems to some extent.

The female moth deposits eggs on the undersides of soybean leaves (producing over 600 eggs during her lifespan). Eggs will take about 3 days to hatch and will develop through 6 larval stages over a two week period. Development from egg to adult takes approximately four weeks.

Larvae are light to dark green with distinctive white stripes running down their sides. They are typically about one and one-fourth inches long. The soybean looper can be distinguished from green cloverworms by the fact that they have only two sets of prolegs on their abdomen compared to three sets for cloverworms.

Once hatched, the soybean looper feeds in the lower half of the canopy where the egg was laid. The soybean looper has an unusual defoliation pattern, feeding from the lower, inside canopy and then moving up and outwards. When scouting for pests, this type of feeding pattern can be easily overlooked, as the outer canopy appears undamaged until the top of the plant is defoliated. Most foliage is consumed by the fourth to sixth instars, during the last 4-5 days of the larval stage

If defoliation levels indicate that further sampling is necessary and numerous looper larvae are present in the field, take 20 sweeps with a sweep net in each of 5 field areas. Alternatively, use a shake cloth to sample. At several locations in the field, place the shake cloth on the ground between two rows and shake the soybean plants over the cloth. Shake two feet of row on each side of the cloth. Record the number of (healthy) worms at each site. Once you have visited several locations, average the numbers you collected at each site. An average of several sites will provide you with a better estimate of what is happening in the whole field. Populations of approximately 75 larvae per 100 sweeps are generally sufficient to cause 15 percent or more defoliation.

You may also want to estimate the percent defoliation on the plants. This can also be used as a measure of damage. The chart below (Fig. 1) may be useful in determining foliage losses.

Management guidelines
Beneficial insects and diseases commonly regulate soybean looper populations to below economic injury levels in most areas where soybeans are grown.

Dense cloverworm populations and moist conditions help encourage epidemics of a fungal pathogen that can eliminate even threatening populations in a few days, without the use of insecticides. The epidemic spreads from mummified remains of parasitized larvae on the ground or up in the foliage. Large numbers of spores are released from the dead soybean looper larvae and infect other nearby larvae, frequently leading to a total population crash in a period of days.

Thresholds
Large populations of soybean loopers are usually observed during late season. Thus, later-maturing soybeans are at greater risk to infestation. Soybeans are more tolerant to defoliation as they mature, with the R3 – R5 stages being the most sensitive and R6 much less so (you can probably tolerate over 50 or 60% defoliation at this stage). R7 soybeans are safe from yield loss to defoliators like loopers.

If plants are in the late vegetative stages, consider applying an insecticide when approximately 35% of foliage has been lost, or when soybean looper worms (one-half inches or longer) are present with 8 or more per row-foot. If plants are blooming or filling pods, then plan to apply the insecticide when at least 4 worms (one-half inches or longer) are present per row-foot or if there has been more than 20% loss of foliage.

Soybean loopers are sometimes difficult to control with insecticides because resistance has been confirmed for pyrethroid, carbamate, and organophosphate insecticides. Consult your local state Extension office for insecticide recommendations. Always read and follow label directions.