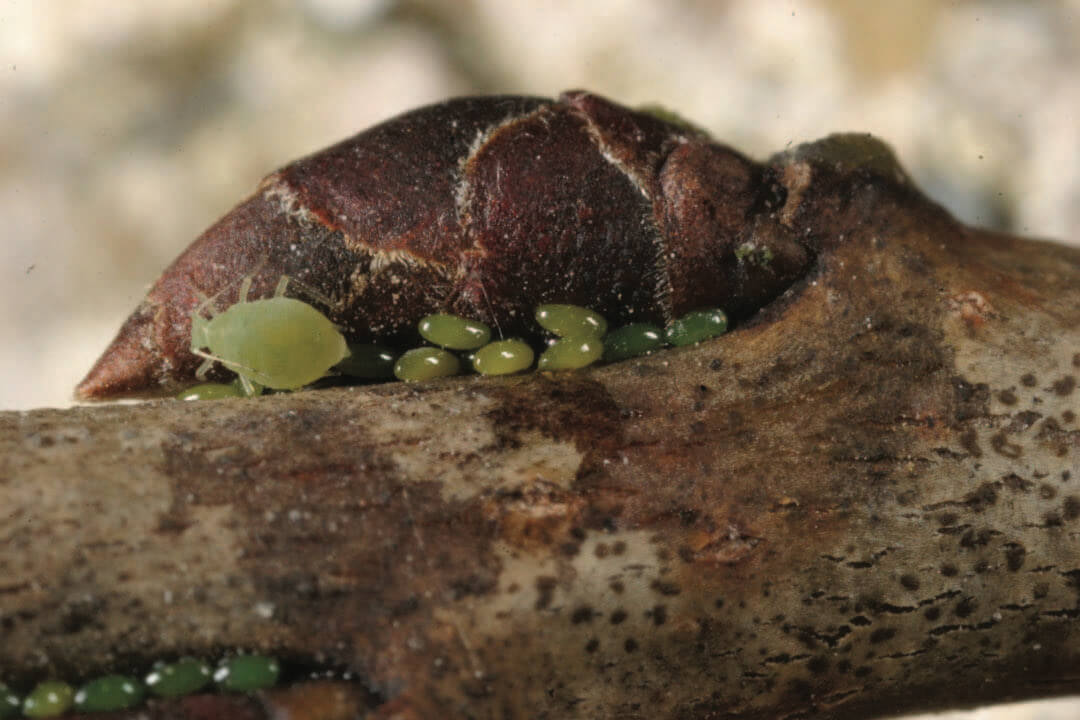 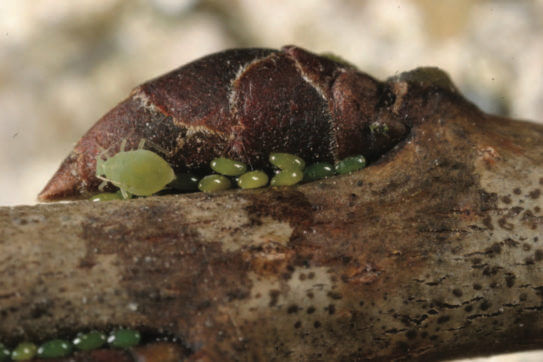 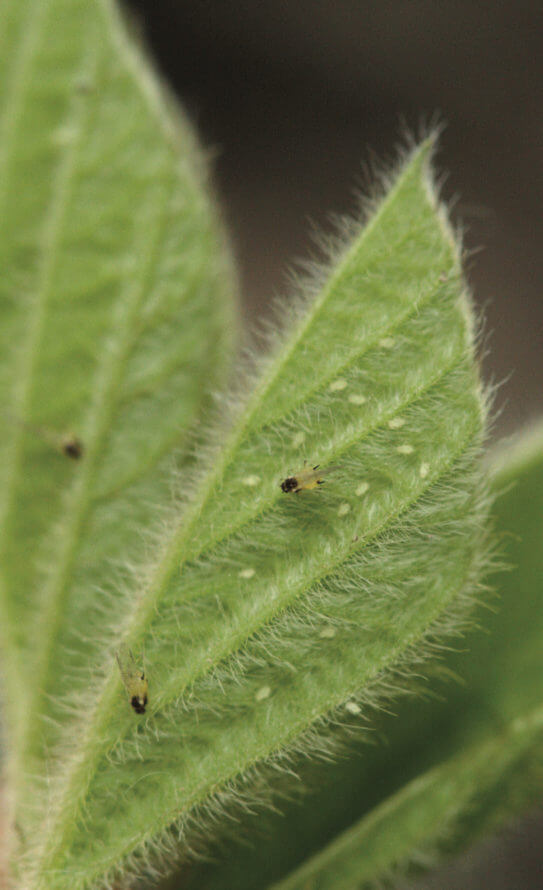 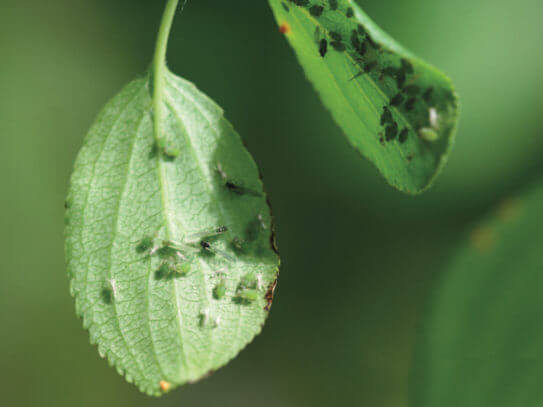 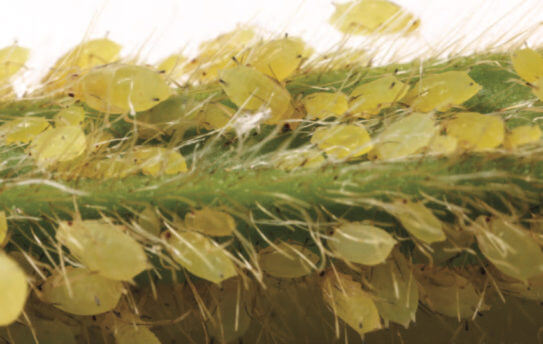 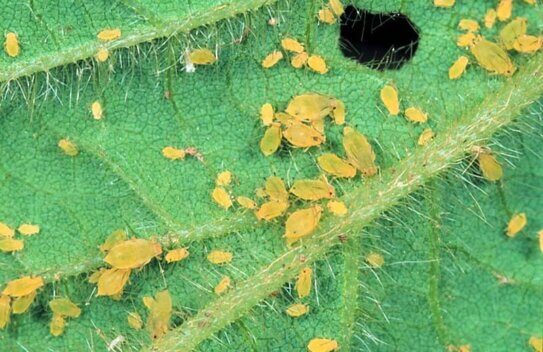 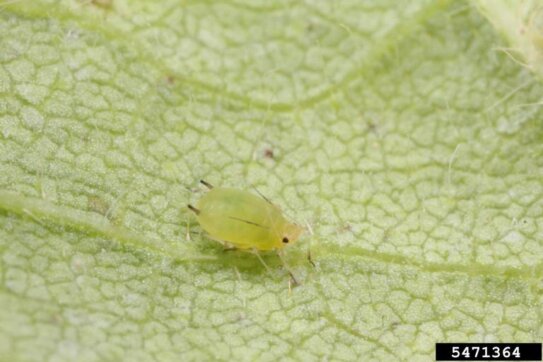 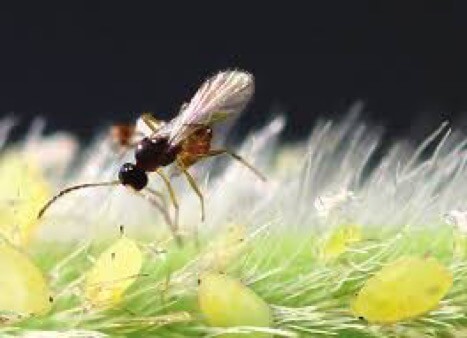 The soybean aphid (Aphis glycines), is a native of Asia and was first documented in North America in Wisconsin in July 2000. Since then, it has spread to nearly all soybean producing states. The highest risk for economic yield loss occurs in Illinois, Indiana, Iowa, Michigan, Minnesota, New York, Pennsylvania, Wisconsin, and Ontario, Canada, where cooler temperatures favor aphid development.

The soybean aphid feeds using sucking, needle-like mouthparts to extract plant juices. If aphids are present in large numbers, this feeding may cause a reduction in plant vigor and growth rates, as well as leaf puckering, reduced pod/seed counts, and ultimately reduced yield.

The risk of yield loss is greatest when aphid populations peak during the R1-to-R4 growth stages. During these stages, blooms and young pods are most susceptible to stress. Damage from aphid feeding also increases when growing conditions are less than optimum.

Aphid honeydew, produced as a waste product during feeding, promotes the development of sooty mold on leaf surfaces, which reduces the photosynthetic activity of the leaves and ultimately yield.

Although infestations can be sporadic and unpredictable, this aphid has demonstrated the capacity to cause significant yield loss if not properly managed. Minor yield loss first starts to justify the cost of treatment at about 650 aphids/plant, with yield loss increasing with increasing numbers of aphids above this level.

Aphids can transmit soybean viruses
A separate issue from the direct damage caused by aphid feeding is their ability to spread virus diseases, such as soybean mosaic virus, from plant to plant as they feed.

Virus infection that occurs in early growth stages presents the greatest risk of yield loss and reduced seed quality, compared to infection later in the season.

The soybean aphid has a complicated life cycle that is completed on two very different plant species: soybean and the common buckthorn tree (Rhamnus cathartica).

Soybean aphids overwinter as eggs on buckthorn. In the early spring, two wingless generations are produced, followed by a winged generation that leaves the buckthorn and flies in search of soybean.

Although winged aphids are not strong flyers, they can move long distances by gliding passively along wind currents. Spring migration usually occurs during soybean emergence. Soybeans located near buckthorn stands are more likely to get colonized by spring migrants.

During summer, the aphid population on soybean consists of females that give birth to live young females. These female nymphs mature in 5-7 days and begin producing their own young. Cycles of live births can result in up to 15 generations per season. Under favorable conditions, populations can double in just a few days. Daily temperature is a good predictor as to how quickly aphid populations increase. Population growth will be fastest at daytime temperatures between 75-80°F. Population growth will slow, stop, and may even decrease when temperatures are hot (greater than 90°F). This temperature effect explains why the aphid is not normally a production problem in southern growing regions.

The female nymphs do not have wings, but can produce winged aphids when conditions become crowded. Winged aphids may stay in the same field, fly to nearby fields, or migrate longer distances up to 6 miles per day.

In late summer, aphids mature into winged females and migrate back to buckthorn. They mate with winged males (the only time males are present) and lay eggs.

Soybean aphids are small (< 1/16 inches), yellow-bodied insects with distinct black cornicles (sometimes referred to as “tailpipes”) at the end of the abdomen (Figure 1). They may be either winged or wingless. 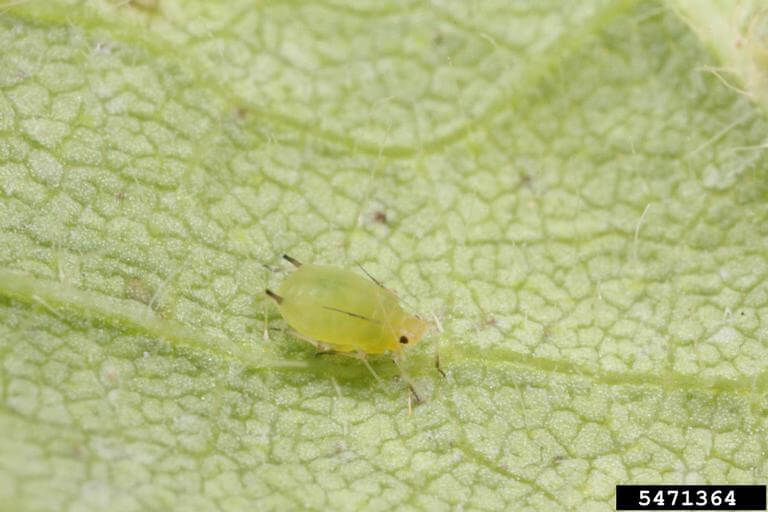 Sampling Method
The soybean aphid is the only aphid in North America that will develop large, persistent colonies on soybean. However, other common soybean insects may be confused with soybean aphid, so it is important to correctly identify soybean aphid to prevent unnecessary insecticide applications.

Early-season scouting (May through mid-July) should focus on fields that have histories of early colonization by soybean aphids, particularly early-planted fields and fields near buckthorn, the overwintering host of soybean aphid.

Aphid sampling consists of whole-plant counts of affected plants with a threshold of 250 aphids/plant on 80% of the scouted plants. Count 20-30 plants/field and be sure to sample the entire field. Focus your counts on the undersides of leaves initially, though aphids will spread throughout the canopy when populations grow. When counting aphids, remember that soybean aphids colonizing the stem of the plant are an indicator of populations in excess of 400 aphids/plant (i.e. over threshold).

Take note of the presence of winged aphids, high predator activity, and/or diseased aphids. There are several beneficial organisms that act to regulate soybean aphid populations to varying degrees. These include Asian ladybird beetles and minute pirate bugs, and their presence should be noted when scouting a soybean field as well. These are all signs that the population may be in decline and/or may leave the field shortly. Scout these same fields again within a few days to note if populations are increasing or decreasing.

Do not adjust the 250 aphids per plant threshold downward. It was created in the presence of damage by other insects, like Japanese beetles and bean leaf beetles, so it doesn’t need to be adjusted for other pests. It was created with data taken during the biggest aphid outbreak years, so it doesn’t have to be adjusted just because the current year is a “big aphid year.”

The 250 threshold gives you five to seven days lead time to take action, or even to see populations drop from fungal infection or a heavy rain. Most critical, 250 is below the damage boundary – the lowest point where yield loss is detected. Experience shows that about 400 to 500 aphids per plant are needed before yield loss can even be detected by a yield monitor or in research trials. Minor yield loss first starts to justify the cost of treatment at about 650 aphids/plant, with yield loss increasing with increasing numbers of aphids above this level.  In the time since the establishment of economic thresholds for soybean aphid, university-based research has continued to reconfirm the economic threshold and the relationship between aphid populations and crop loss. Although crop and input prices continue to increase, no consistent economic gain can be found with a reduced economic threshold for soybean aphid.

In light of this, growers should not rely on a single method of pest management and should continue to scout fields thought to be resistant.

Aphids are slow-moving, succulent, and generally poorly protected from predators. Therefore, they have many natural enemies. The soybean aphid is only a sporadic pest in most of it’s native range in China, Japan, and Korea because of the presence of parasites and predators that keep them in check.

The soybean aphid would be a far more damaging pest were it not for naturally-occurring biological control. For example, in a recent study of 22 locations in the north central region, more than 50% of aphid-infested fields were kept below threshold level by predators.

Even though the soybean aphid is a recently-identified pest in North America, aphid predators and parasites are already present in soybean fields and have the ability to delay or prevent severe outbreaks.