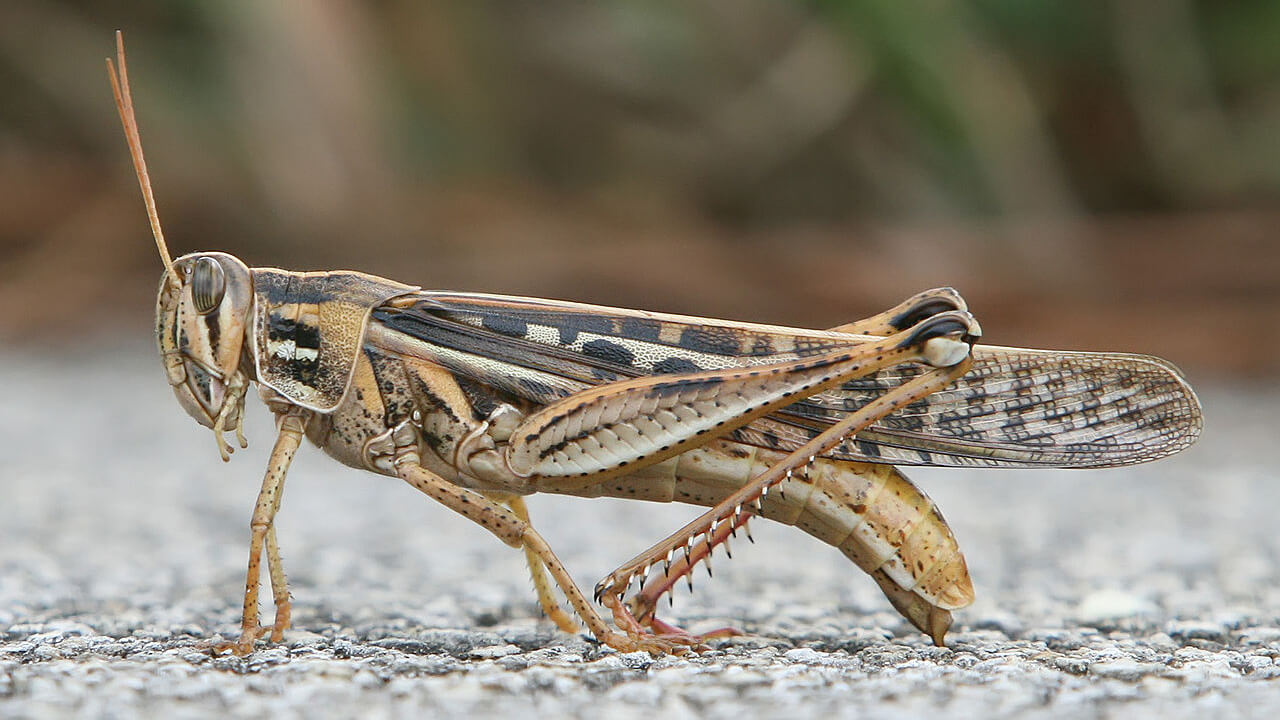 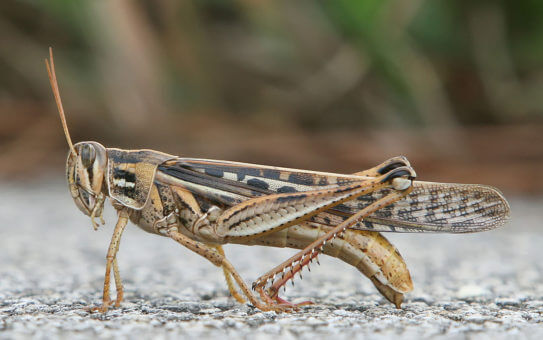 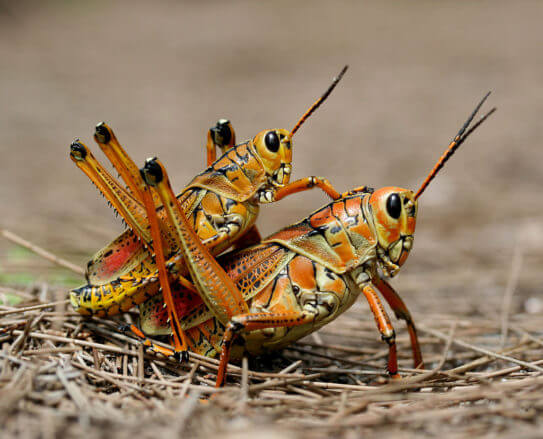 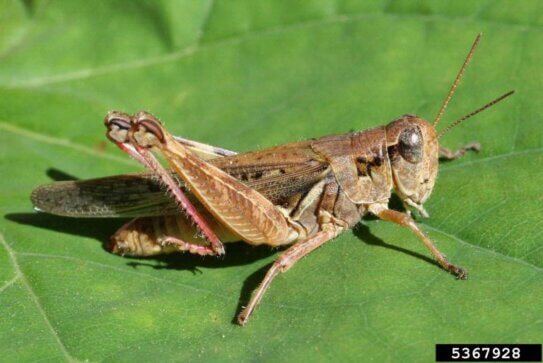 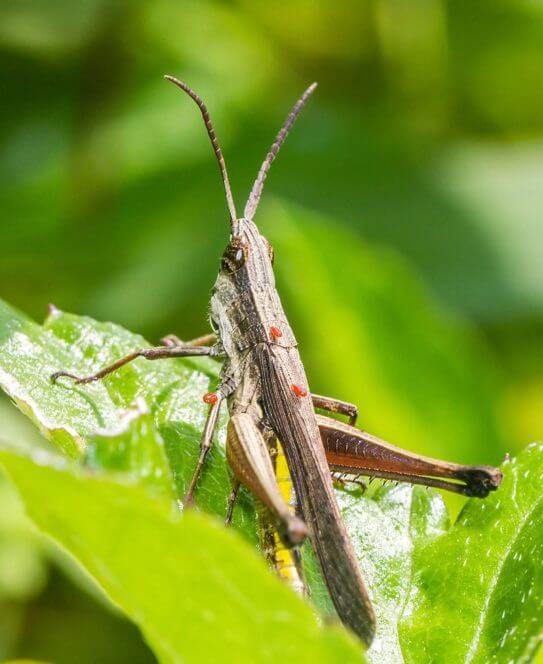 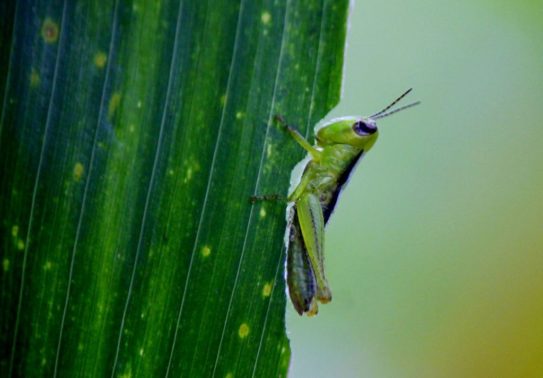 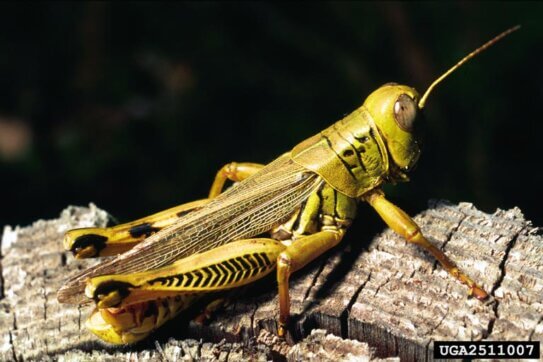 Corn, soybeans, small grains and other crops may have localized problems with this pest when grasshopper populations are high. Grasshopper nymphs can consume entire soybean seedlings. On more mature plants, the nymphs eat irregular holes in the leaf issue. Adult grasshoppers consume entire leaves, except the tougher veins, and also feed on the pods. 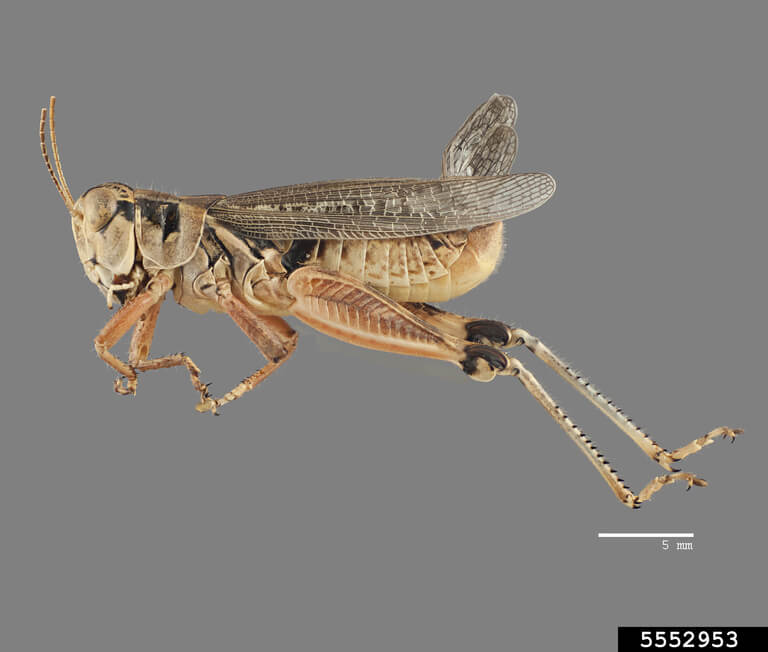 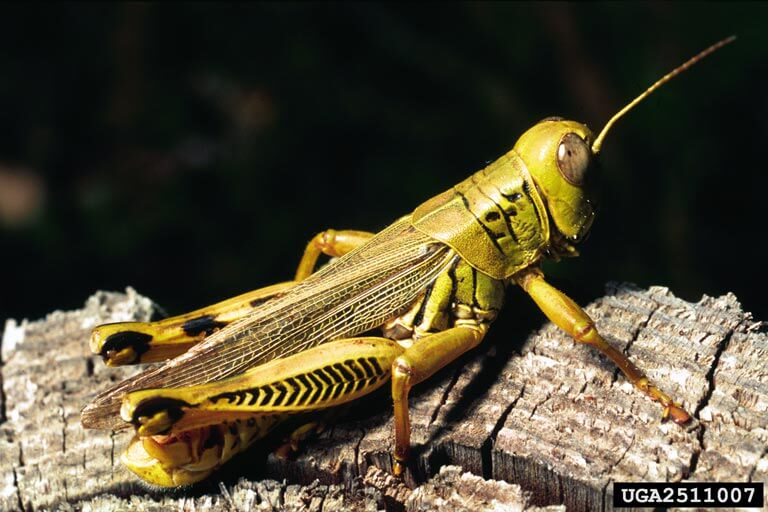 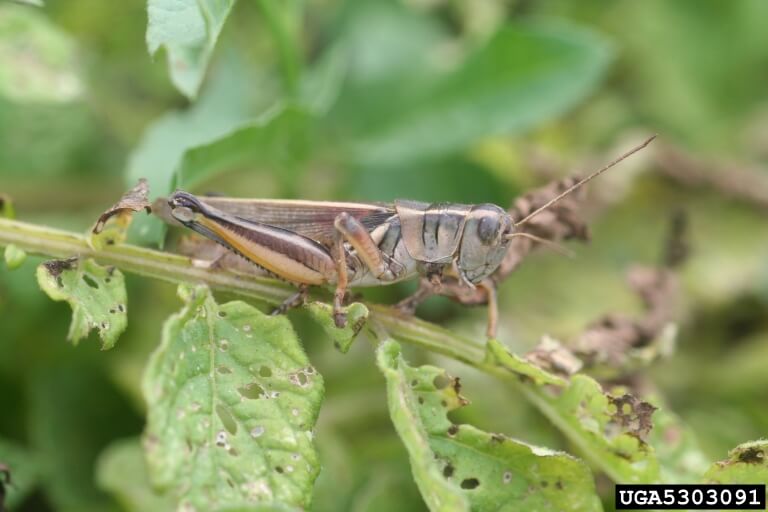 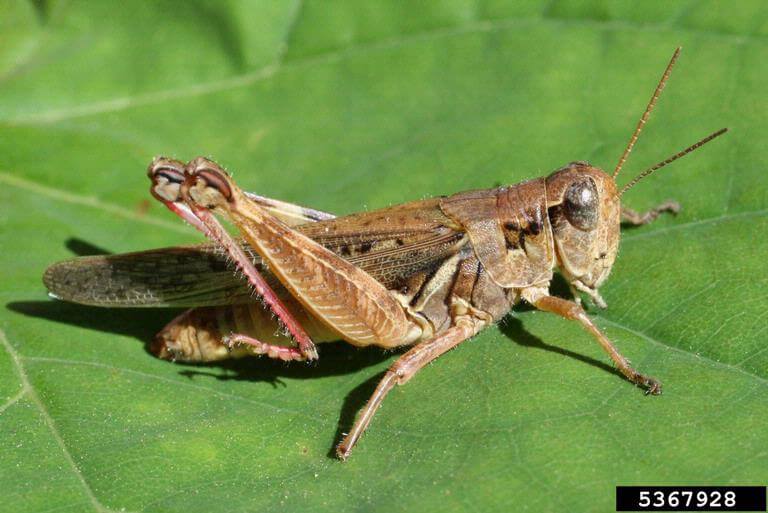 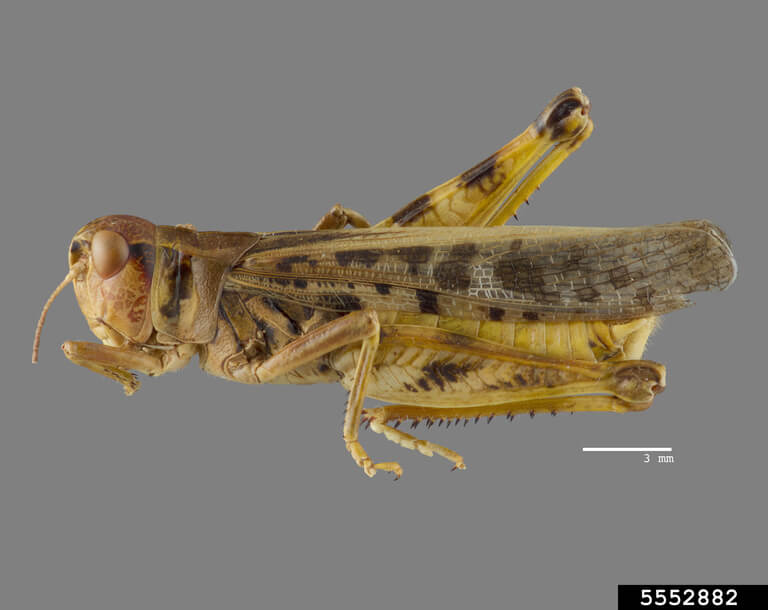 Scouting should start after plants emerge. Concentrate sampling on field margins, fence rows, dirt roads and ditches. Soybean fields adjacent to undisturbed weedy sites, alfalfa, and small grain fields are susceptible to grasshopper infestation, so fields with this characteristic should be monitored carefully. Insect counts can be used when scouting early in the season. Later in the season, as plants develop, estimating percent defoliation is the recommended method.

Later in the season, visually inspect plants for defoliation. To estimate defoliation, examine a minimum of 10 plants.

From each plant, select a leaf from the top, middle and bottom thirds of the plant.

Injury symptoms
Leaf injury from grasshopper nymphs look similar to the small holes caused by Japanese beetle feeding but are more jagged in shape. Older nymphs and adult grasshoppers will eat the entire leaf, leaving only the major leaf veins.

Insecticide management
Decisions should be based on the attainment of certain thresholds.

For insect number estimation, a consensus threshold of 30-45 nymphs or 8-14 adults per square yard within the field justifies treatment control. If the grasshopper population is found on field margins but not within the field, it may be justifiable to treat only the margins. If more than 60 nymphs per square yard were observed on adjacent non-crop areas, the areas and the portion of the field immediately bordering the areas may be treated. If both crop and non-crop borders are treated, be sure the product chosen is labelled for both sites.

For defoliation-based threshold, the following recommendations from the University of Minnesota can be used:

Chemical and biological control products
Adult grasshoppers are difficult to control with insecticides due to their size, mobility, and decreased susceptibility to the insecticides. The best time to control grasshoppers with insecticides is during the 3rd and 4th instars when they are 1/2 to 3/4 inch long. These stages will occur in early to mid-summer, depending on the species and soybean growing region. By this time, most eggs will have hatched and the nymphs will be more susceptible to insecticides. Also, they will still be concentrated in their hatching areas where they can be controlled more effectively than when dispersed later in the summer.

The biological control agent, Nosema locustae, can be placed on various baits and is marketed for grasshopper control under several trade names. Grasshoppers must eat the Nosema-treated bait as second or third instar hoppers. This requires both early season scouting and treatment of grasshopper populations in border areas of the field. Flaky wheat bran treated with Nosema locustae is particularly recommended when control is needed near water or near threatened and/or endangered wildlife. Check with local Extension units for recommended insectides and for Nosema products available in your area. Always read and follow directions on the product label.

Cultural Management
Tillage of small grain stubble or fallow before the egg laying period may be an effective deterrent to oviposition (egg laying in the soil). Tillage after eggs are laid is ineffective since it does not cause egg mortality.

Eliminate tall grass and weeds around crops, trees and gardens you want to protect. This reduces food sources so grasshoppers are not attracted to these areas, exposes grasshoppers to greater predation from birds and mammals, and also makes these areas less attractive for egg-laying.

Similarly, summer weed control in fallow fields eliminates food sources so there will be nothing for small nymphs to feed on when eggs hatch, and fields will not be attractive to egg-laying adults.

Beneficial Insects and Fungi
Many beneficial insects feed on grasshoppers. Natural enemies are the reason why we generally see only localized outbreaks of grasshoppers. Some beneficials include the larvae of blister beetles and ground beetles (which feed on the eggs), bee flies (parasites of eggs), robber flies, Scelionid wasps, flesh flies (Sarcophaga), certain species of parasitic nematodes, the red locust mite, and tangle-veined flies. The parasitic flies deposit eggs on the nymph or adult, and the emerging larvae eat their way into the body of the grasshopper. Generally, parasitized grasshoppers die earlier and do not reproduce.

Predation of nymphs and adults by larger animals such as toads, snakes, birds, skunks, shrews and moles also have an impact on grasshopper populations during the summer months.