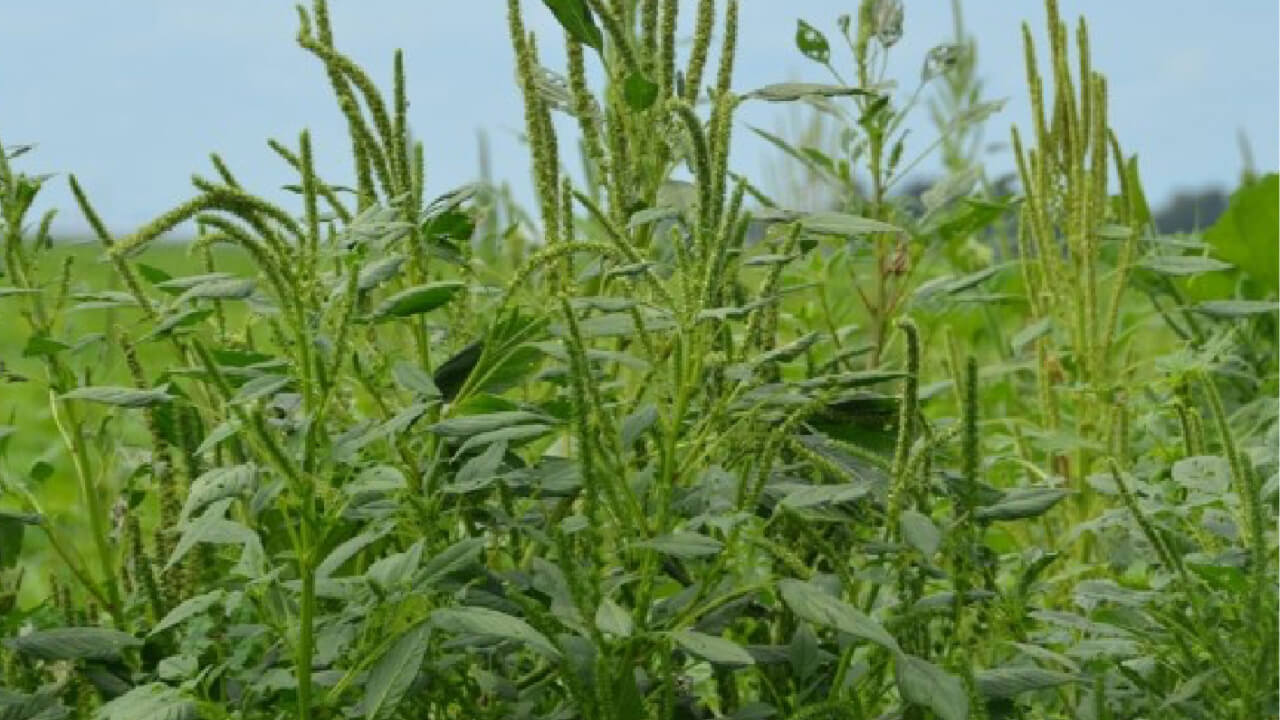 Overview
Implementation of effective weed control strategies is an important component of soybean production. Con­trol efforts become economically justified because of the potential for soybean yield reduction, crop quality loss, harvesting difficulties, or other problems associated with the presence of weeds. In some situations, however, low weed popu­lations may not interfere with crop yield, harvestability, or crop quality. Thus, producers could allow low populations of certain weeds to remain in the field throughout the growing season without affecting the crop. Some weed species however, such as smooth pigweed (Amaranthus hybridus), Palmer amaranth (Amaranthus palmeri), and common lambsquarters (Chenopodium album) are capable of produc­ing thousands of seeds from single plants, thus weed seed added to the soil bank from even relatively low populations can be substantial. It is advisable to control populations of most weeds, particularly newly introduced species, before they reach maturity. Furthermore, vining weeds such as bur cucumber (Sicyos angulatus), morning glory (Ipomeoa spp.), and trumpet creeper (Campsis radicans) can interfere with soybean harvest and reduce yield. The potential yield loss from various weed populations is illustrated in Table 1.

Most studies evaluating weed-soybean competition indicate weeds that emerge and grow with soybean during the first three weeks, but are then removed, do not reduce soybean yield under normal environmental conditions. Weeds that remain in the crop from three to eight weeks after soybean emergence have the greatest potential to reduce soybean yields. Weeds that emerge six to eight weeks after soybean emergence in fields, which have been kept weed-free up to that point, are not likely to reduce yield or have a negative economic impact relative to the cost of in-season treatment. However, these later emerging weeds may cause harvest problems, reduce crop quality, or produce more weed seeds.

The most effective way to manage weeds in soybeans is to use an integrated weed-management program that includes crop rotation, good crop production practices, cultural weed-control practices, and a diversified herbicide program. A key to planning an effective weed-management program is to be aware of what weed species are present in the field and understand the biology of those weeds. Annual field records of weed species present, relative abundance, and problem spots are helpful when designing an effective management plan.

Early-emerging weeds are the most competitive with crops and can be the most difficult to control. It is important to have a weed-free seedbed at planting. This can be accomplished with tillage in conventional tillage systems or with herbicides in no-till. Winter annual weeds generally are not a problem in conventional tillage because they are controlled with spring tillage before planting. However, winter annual weeds such as henbit (Lamium amplexicaule), marestail (horsetail) [Conyza canadensis], mustards (Brassicaceae), and weedy bromes (Bromus spp.) that emerge in the fall or early in the spring can be problematic in no-till systems if not controlled early enough. Uncontrolled winter annual weeds can use nutrients and moisture, interfere with planting, and be difficult to control at planting because of their advanced growth stage.

Fall herbicide treatments from late October through early December, or early spring treatments in March and April can provide good control of winter annual weeds and help facilitate better planting conditions. Herbicide combinations with different modes of action provide the broadest spectrum of control and help prevent the development of herbicide-resistant weeds. Glyphosate (Group 9), 2,4-D (Group 4), dicamba (Group 4), metribuzin (Group 5), and various ALS inhibitors (Group 2) are some of the more commonly used fall and early-spring burndown treatments in soybeans. Longer residual herbicides also can be used in fall and early-spring treatments but tend to be costlier and probably will not provide much weed control into the soybean-growing season. Consult herbicide labels for required pre-plant intervals ahead of soybeans and any guidelines regarding soil texture, soil pH, precipitation requirements, or geographical use restrictions.

Cover crops planted in the fall and controlled in a timely manner in the spring also may help suppress weeds. There are many potential cover crop combinations, but to be effective for weed suppression, they need to establish quickly and be competitive. Another key component of using cover crops is to be able to terminate them effectively and in a timely manner to prevent seed production, avoid excessive moisture use, and facilitate good planting conditions. Research from Iowa State University has demonstrated that ryegrass, terminated too close to planting, can increase the amount of Pythium seedling blight in the soybean crop.

Kochia (Kochia scoparia), giant ragweed (Ambrosia trifida), and common ragweed (Ambrosia artemisiifolia) are summer annual weeds that primarily germinate early in the spring before soybean planting. In addition, few post-emergence herbicides are effective for kochia and ragweed control, especially if glyphosate-resistant populations are present. Consequently, the key to managing these species is to control them with pre-plant herbicides.

Conversely, most waterhemp (Amaranthus rudis) and Palmer amaranth (Amaranthus palmeri) do not germinate until later in the spring and into the growing season. Waterhemp and Palmer amaranth are both pigweed species that can be competitive with soybeans, have developed resistance to several different herbicides, and are difficult to control post-emergence. Pre-plant and pre-emergence herbicides with multiple effective sites of action and good residual pigweed activity are critical for their management. The best approach for pigweed control is to use overlapping residual herbicides as pre-plant, pre-emergence and/or post-emergence treatments. Relying solely on pre-plant herbicides too early in the spring creates a situation where herbicides will not persist long enough to control later-germinating pigweeds.

The primary post-emergence herbicides that provide control of the pigweeds in conventional soybeans are the PPO-inhibiting (Group 14) herbicides. All of these products can provide good control when applied to small pigweeds, but control decreases dramatically after pigweeds exceed 3 inches in height, especially Palmer amaranth. Pigweed resistance to the post-emergence Group 14 herbicides also is present in some populations, so pigweed control with these herbicides can be inconsistent. Residual shoot growth inhibiting herbicides (Group 15) can be added to post-emergence applications for extended control of pigweeds and small-seeded grasses but will not control any emerged weeds.

Where extensive populations of glyphosate-resistant weeds have developed, alternative herbicide-resistant soybean traits may be warranted. These technologies should be used as part of a diversified weed management program with effective residual herbicides to achieve acceptable weed control and sustain the technologies.

Herbicide-tolerant varieties provide additional op­tions to control some weed problems. However, there are concerns associated with their use. These include a) misapplication of an herbicide to a traditional susceptible soybean variety, b) greater selection pressure for herbicide-resistant weed species or shifts in weed populations due to the repeated use of the same herbicide mode of action, c) herbicide-tolerant crops becoming weedy and difficult to control, d) marketing issues, and e) negative public reaction to biotechnology-derived crops. Herbicide-tolerant crops require a high level of management to prevent problems such as misapplication, spray drift, or further development of weed resistance.

It is critical to keep accurate records and communicate clearly with your herbicide applicator and neighbors regarding herbicide-resistant traits within fields to avoid misapplication and reduce the potential for non-target herbicide injury. “Flag the Technology” is a program that consists of different colored and patterned flags to represent different herbicide trait technologies. Flags can be purchased online and should be placed at the entrance and/or visible locations in fields for applicator and neighbor awareness of what traits are planted.