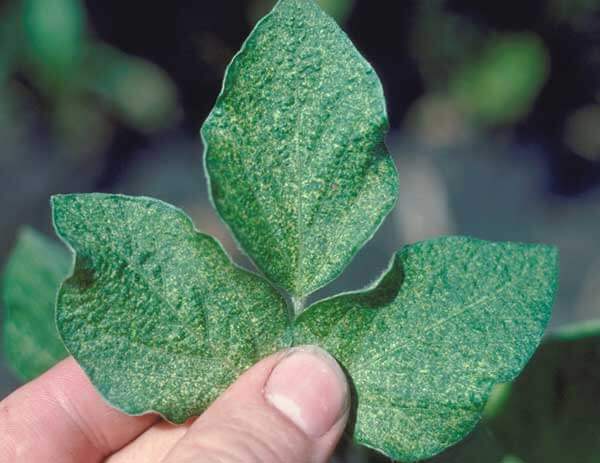 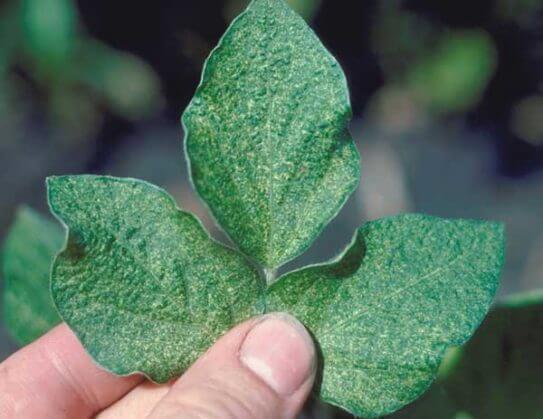 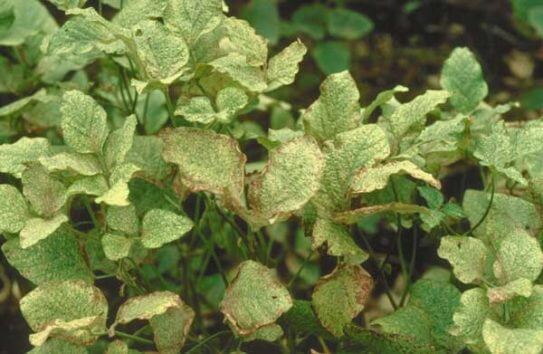 Two-spotted spider mites (Tetranychus urticae) are more closely related to spiders than to insects. They are widely distributed across all soybean growing regions and are present in soybean crops every year, but they are not often a significant problem. The risk of significant two-spotted spider mite infestations increases considerably during periods of hot weather and prolonged drought. For farmers and crop advisors not familiar with spider mites, the progression of symptoms from silvering, yellowing, browning, lower leaf loss and death, may be mistaken for drought symptoms.

Mites overwinter as adults which lay eggs in the spring. Hatching mites establish colonies on the undersides of leaves that produce the webbing over the leave surface, prompting the name “spider” mites.

Spider mites damage plants by piercing the leaf cells with their mouth parts and sucking plant fluids from the leaves. This injury produces white or yellow spots or “stippling” that is heaviest on the underside of the leaves. The leaves lose photosynthetic surface as feeding continues. Water loss from the damaged leaf surface is uncontrolled. If the infestation is unchecked by parasites, predators, or miticides, spider mites may kill the entire plant.

Identification
Adult spider mites are tiny arthropods with eight legs, not six, like insects, and no wings. Most are greenish-white or yellow, and occasionally orange or brown, and have a pair of distinct dark spots on the outer edges of the back (Figure 1).

Spider mites have a relatively simple life cycle, progressing through three stages between egg and adult. The two-spotted spider mite overwinters as adult females. Egg laying begins in late April or May and hatch in 5 to 8 days. The mite progresses through two nymph states before reaching the adult stage with 8 legs. The time from egg to adult normally requires about 3 weeks, but may take less time under hot and dry conditions. Depending on weather conditions, 5 to 10 generations may occur within a growing season.

The best time to scout is in July and August, especially during periods of hot, droughty weather. Spider mite populations can build rapidly.

As you scout soybeans for other pests and problems, always give a look to the plants near the edges of the fields or grassy areas in the field where soybeans are stressed. If spider mite populations are increasing, they will probably be noticed there first.

Soybean foliage infested with spider mites will initially appear speckled or “stippled”. As plants become heavily infested, the foliage turns yellow, then bronze, and finally the leaves drop off the plants from the bottom up. The effect of heavy feeding by mites leads to dehydration and death of the plant. For farmers and crop advisors not familiar with spider mites, the progression of symptoms may be mistaken for drought symptoms. Heavily stippled upper leaves may also exhibit deformations that look like herbicide injury.

Checking for mites
Look for yellowing plants that appear sandblasted, and then look for the mites and webbing on the undersides of the leaves. Hold a clipboard with a white sheet of paper under the leaves and tap the leaves to dislodge the mites. Yellow, brown or black specks that move across the paper are probably spider mites. Crushing the mites will leave a small, reddish-brown spot on the white surface.

A 10X hand lens is necessary to clearly see the mites, although with good eyesight mites can be seen unaided, once your eyes are adjusted.

Sample both injured and healthy plants to determine if the infestation is spreading. Also, be certain that the yellowed soybeans are caused by spider mites. Other factors, including iron deficiency chlorosis and soybean cyst nematode can cause soybeans to turn yellow.

If mite presence is verified, it’s time to progress into the field. Move at least 100 feet into the field before making your first stop. Walk a “U” pattern checking at least 2 plants at 20 locations. Assess mite damage using the following scale:

0 — No spider mites or injury observed.

No specific threshold levels have been established for the two-spotted spider mite. Use the scale above as a guide. Consider treatment when injury progresses to a rating of 3. Fields with ratings of 5 or worse may not be salvageable. Check fields every 4-5 days if drought persists since damaging infestations can develop quickly.

Spider mites are widely distributed throughout the region.

Spider mite populations are generally suppressed by a common fungal pathogen, Neozygites floridana that attacks all stages of mites and is host-specific to spider mites. Spores from the fungus attach to the mite’s body, germinate, and infect the body. During early infection stages, mites have a discolored, waxy or cloudy appearance and mite death occurs within 1 to 3 days.

The environmental conditions necessary for the fungus to be active are temperatures cooler than 85°F and high humidity. Rain itself does not trigger the fungal infections; the resulting high humidity is still necessary. When conditions are not favorable for the fungus to grow, it will produce resting spores in infected, dead mites until environmental conditions trigger the resumption of growth and spore release. When the fungal parasite is active, it can reduce populations of mites very rapidly.

If leaf discoloration is apparent, two-spotted mites are positively identified, and hot, dry conditions are expected to persist, it is recommended that a miticide be considered. Spot treatments may be effective if infestations are caught early and the mites have not yet moved throughout the field. Success of spot treatments depends on spraying beyond (e.g., 100 to 200 feet) the infested area, not just the damaged area. If sampling results indicate that movement has occurred in several areas of a field, or throughout the field, then treatment of the whole field should be considered.

Don’t re-spray with the same product. Switch products (and modes of action) between applications to ensure miticide resistance won’t develop.

Unfortunately, insecticide and fungicide applications made for other insect and disease problems can have a negative effect on both insect predators and fungal parasites of the mite. Use of these products can result in mite “flare-ups” in areas where they have been previously held in check by natural enemies.