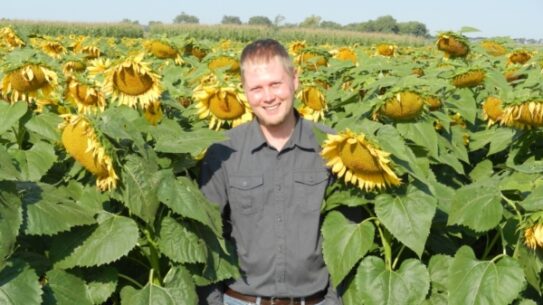 Why did you decide to pursue a career that includes soybean research?
I grew up on a farm in eastern North Dakota raising a large diversity of crops, including soybeans. During that time, I recognized how important soybeans are in a crop rotation. I studied weed management in college with projects involving herbicide trait management and no-till systems. While I never specifically targeted soybeans when pursing a career, it became clear early that soybean research needs to be a fundamental component of any agronomy program.

What research topic have you completed in the past or are working on now that could have or has had the most significant impact on soybean production?
The project I am most excited about will finish up in 2021, a capstone on a rye cover crop study initiated in 2013. The study has evolved over the years, but the final version is focused on determining conditions that make it safe to “plant green” (soybeans into living rye). In central North Dakota, we’ve seen instances where winter rye has reduced soybean yields, while in other years the two crops co-exist well. This study is designed to help growers successfully plant a rye cover crop while also growing a full soybean crop in some of the drier regions of the Midwest.

How has the soybean checkoff enhanced your ability to find answers to production problems for farmers?
have several examples of research projects initiated as a response to questions from producers, which were then funded by the soybean checkoff. This includes one of the most stressful studies I have conducted to date – a herbicide activation trial. As part of this study, I was applying soybean pre-emergent herbicides and hoping to get a window without rain. Over two years, I picked correctly and found periods with greater than two weeks without rain. We used a center pivot irrigator to activate the herbicide in some plots at different intervals. The results showed a high level of stability for our herbicides even with a one-week delay in activation. In another example, we were able to study different fall-applied herbicide options for kochia management.

Within your area of expertise, what are the top two or three general recommendations you would offer farmers to improve their management practices?
I think the biggest need in agriculture is to protect our topsoil. There are various things a farmer can do in and outside of fields to achieve this goal. The key is to start thinking about the best way to address soil loss. I always think of this from the perspective of a homestead on the prairie. Those living on rural farmsteads now can thank their predecessors for the foresight of planting shelterbelts to protect them from the wind. Those plans took years and hard work, often with little or no benefit to the ones establishing them. Reducing erosion is the same principle. There is no immediate reward, but the next generation will be grateful for better quality soil.

Within your area of expertise, what do you consider to be critical soybean research needs that can impact the profitability of farmers in the future?
Systems research is often one of the most difficult topics but most fundamentally beneficial things to study. It is one thing to identify consequences to good or poor decisions within a single crop year, but farming is a long-term endeavor. For instance, recommended soybean plant populations have been trending lower, which works since soybeans can compensate for fewer plants by increasing pods per plant. However, we know that higher plant populations do things like compete better with weeds and reduce time to full canopy coverage (with possible hidden future costs). More work on systems approaches is needed to identify long-term cost:benefit of some basic agronomic decisions, which can vary greatly by region.