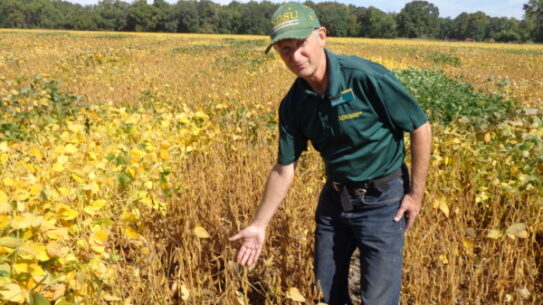 Why did you decide to pursue a career that includes soybean research?
Soybean production intrigued me, as the crop was relatively new in the northern region of the U.S., when I joined the University of Minnesota Extension Service in 1995. Producers had many questions about basic information including variety selection, tolerance to iron deficiency chlorosis, planting and general management of the crop.

What research topic have you completed in the past or are working on now that could have or has had the most significant impact on soybean production?
The eastern part of North Dakota has a large soybean production area within the Red River of the North Valley. Excess moisture can be a limiting factor in soybean production there. I was interested in water management and conducted replicated soybean testing under no tile vs tile drained/water table managed conditions. Based on 20 site years of data, soybean production was seven percent higher with controlled drainage compared to no subsurface drainage.

The second major area of research I’ve been interested in is planting date and cultivar maturity. Research indicated each day producers can plant earlier in the period May 1 to June 1, they can gain an extra 0.35 bushels per acre. When producers increase the maturity of the cultivar by 0.1 units, they can gain 0.7 bushels per acre if the cultivar is within the region’s adapted range.

How has the soybean checkoff enhanced your ability to find answers to production problems for farmers?
Since I came to NDSU in 2007, the North Dakota Soybean Council and the North Central Soybean Research Program have graciously funded many soybean research projects using funds from the soybean checkoff. This has allowed me to be involved in several projects that benefit regional producers directly. I have also been able to contribute data for regional interpretation, in cooperation with many State Extension soybean agronomists throughout the country.

Within your area of expertise, what are the top two or three general recommendations you would offer farmers to improve their management practices?

Within your area of expertise, what do you consider to be critical soybean research needs that can impact the profitability of farmers in the future?
Research needs to continue regarding adaptability of newly released cultivars. To optimize soybean production economics, I’d like to see research continue on the effectiveness of newly developed inputs and interaction with seeding rates, row spacings, varieties and planting dates.