The central goal of this project is to quantify the benefits of commercially available ultrafiltration (UF) and reverse osmosis (RO) water treatment technologies in rainbow trout fed either fishmeal or soy-based diets in recirculating aquaculture systems (RAS). The study will evaluate if combined ultrafiltration and reverse osmosis technologies increase soy protein use in aquaculture feeds.

In trial #1, juvenile rainbow trout with an average weight of 40 +/- 0.5 gm, were stocked in tanks at increasing densities, 25-125 fish, in replicates of 4 tanks/stocking densities for 49 days on an extruded diet which contained 13% fishmeal and no soybean meal.

Trout stocked at higher densities (75-125 fish/tank) in control tanks displayed higher mortality rates, especially at 125 fish density. The average biomass mortalities at 125 density is about 1300 gm/tank. Whereas, the UF/RO tanks had zero mortalities until the 125 density. As a result, the percentage of biomass gain was 10-15% greater for UF/RO trout compared to the control group. 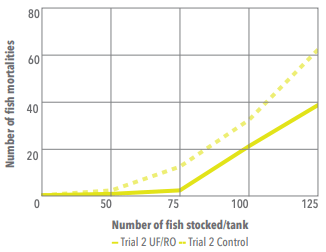 Final stock densities for control trout declined significantly when fish were stocked over 100 fish/tank and both control and UF/RO tanks had trout achieve similar final average body weight of about 50 gm. Compared to the data in trial one, control group mortality had about 50% cumulative mortality and UF/RO fish had 33.4% mortality rate.

Funded in part by the soybean checkoff.