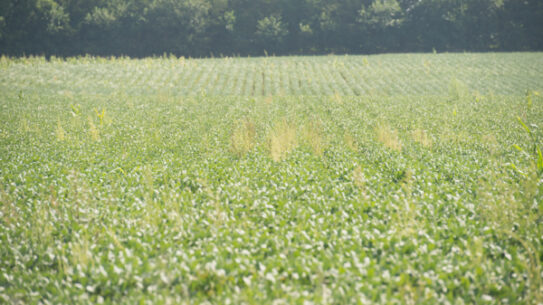 Just like every other long term field crop area of the mid-western U.S., Michigan farmers are battling herbicide resistant weeds.  While we have had some warning time by watching the experience of our neighbors to the south, the adjustments to weed control strategies are very significant and can be challenging.

The Michigan Soybean Promotion Committee (MSPC) has funded multiple research projects to help soybean growers adapt to the serious threat of herbicide resistant weeds.  Dr. Christy Sprague at Michigan State University has been a great partner in this fight against the growing problem.  Dr. Sprague maintains a strong connection to MSPC, MSU Extension educators, agribusinesses and growers and uses their input in developing practical treatments in her research projects.  Her recent work has included:

Michigan soybean growers have used the weed control tools that have been tested in the MSU research projects for many years.  One example of this is fall seeded rye and wheat which have been gaining popularity for their soil quality and soil erosion benefits.  The management of these cover crop species to also improve control of resistant marestail is of great interests by farmers.  The funded research project included evaluating the effect of cover crop seeding rates, cover crop species and spring termination timing.  The project found that adding cover crops reduced the plant biomass from marestail in the following soybean crop.  Seeding rate was not a significant factor in reducing marestail populations.  The comparison of termination timing showed that delayed termination (one week after soybean planting vs. one week before planting) allowed more cover crop growth and reduced marestail biomass compared to earlier termination.

Dr. Sprague used her knowledge of the fact that common waterhemp seeds germinate from shallow depths in the soil to design a research project.  Her project compared a fall moldboard plow to spring soil finish to no tillage.  Population counts of waterhemp seedlings showed a reduction in and consistent emergence in the moldboard plow treatment.

The initial populations of herbicide resistant Palmer amaranth in Michigan proved to be aggressive and difficult to control.  Dr. Sprague quickly developed a research project to evaluate the effect of row spacing, cereal rye cover crop and herbicides.  This project showed that when comparing 30 inch to 7.5 inch rows, 7.5 inch rows canopied earlier and reduced late weed emergence. The rye cover crop did not effect the emergence of Palmer amaranth.  Due to the long emergence period of this weed, a strong but flexible herbicide program is needed.  The best control was found with a preemergent herbicide followed by a post emerge Liberty application.  Weed emergence timing and rainfall variability caused the need for adjustments in the herbicide system such as a follow up Liberty application and/or a residual product to be tank mixed with an early Liberty application.

New genetic technologies (Enlist E3, XtendFlex, LLGT27) in soybeans have added much needed weed control options for growers struggling with herbicide resistant weeds.  Dr. Sprague has evaluated the control of resistant marestail and common waterhemp with multiple rates, products, timings and tank mixes of associated new herbicides in combination with existing herbicides including effective soil residuals.  Her analysis also included managing the choice of these products and technologies around the sensitivity of specialty crops grown in many areas of Michigan.

Non-GMO crops require the careful management of weeds with multiple tools.  Herbicides are one of those tools that demand knowledge of weed species, emergence and application timing, product choice, product rates, tank mix partners and possible crop response.  Dr. Sprague serves the non-GMO growers by evaluating commercially available herbicide systems each year including effectiveness of weed control and soybean yield.  Her annual research summary includes ratings of weed control and economics based on soybean yield and the cost of herbicide weed control.    This research also serves the GMO producers since most of them now use a residual herbicide in combination with later applications on traited soybeans.

The management of weeds in soybean fields is a battle of every soybean grower.  The increasing infestations of herbicide resistant weeds require new tools to be used in the battle.  The investment of soybean checkoff funds in this area is a value to nearly all soybean growers.  The dedication and commitment of strong University partners such as Dr. Christy Sprague in creating battle plans is critical to the long-term success of the soybean industry.