Early maturing areas in fields can be caused by plant diseases 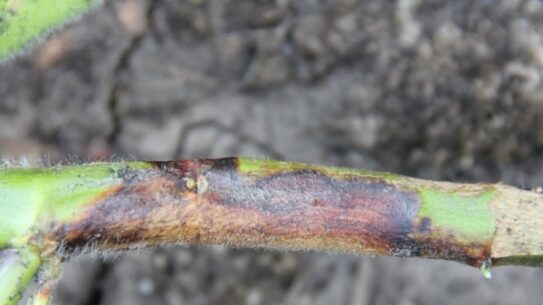 Soybeans are rapidly moving toward maturity across a wide area of the major soybean producing regions. As soybeans complete seed development (R6) and begin to move into the beginning of maturity stage R7, it can be observed in some fields that there are areas of the field that will  begin to turn yellow and drop leaves earlier than the rest of the field. These prematurely yellowing areas are usually associated with some type of stress factor. Stresses can include areas of excessive dryness, wetness, or compaction, or the presence of sudden death syndrome (SDS), white mold or soybean cyst nematode (SCN) in the soil.

Compacted areas or dry areas such as the terrace tops may be an indicator of the presence of charcoal rot. Charcoal rot is favored by hot, droughty soils. As plants mature, you can find the small, black reproductive structures known as microsclerotia in the cortex, just under the epidermis, or imbedded in the outer stem, which can give the stem a silvery appearance.

Low or poorly drained areas of fields may be affected by Phytophthora root rot, stem canker, or sudden death syndrome. Each of these pathogens have characteristic symptoms that can be diagnostic for their presence. For instance, Phytophthora root rot infected plants often have a chocolate-brown stem discoloration that extends up the main stem from the soil surface. The root system will typically be discolored with most of the root hairs and secondary roots rotted away, leaving only the taproot.

Stem canker, as the name implies, is characterized by dark, sunken cankers that typically form on the stem where the leaves are attached. When severe, the cankers can completely girdle the stem causing it to look like Phytophthora root rot. One distinguishing characteristic between the two diseases is that stem canker infected plants will usually have a normal looking, intact root system.

The SDS pathogen is soil borne and is favored by soils that become excessively wet during the reproductive growth stages. The disease is characterized by leaves that begin to turn yellow and then brown with the veins remaining green. Leaves eventually drop off with the stems remaining attached. Be careful however, as similar symptoms occur with stem canker, brown stem rot and triazole (DMI) fungicide phytotoxicity. To verify SDS, you need to split the tap root and look for a brown to gray discoloration. SDS is also associated with the presence of SCN.

White mold and soybean cyst nematode are not necessarily associated with soil moisture conditions. Both diseases can have an aggregate distribution, that is, they occur in pockets across the field rather than having a uniform distribution. White mold is easily identified by the presence of hard, black sclerotia that can form on the stem surface or embedded in the cortex of the stem.

Unfortunately, SCN is usually present with no visible symptoms. Earlier in the season, the white females may be visible on the roots, but they are only visible for a few days in each life cycle and there can be several life cycles in a single growing season. Where populations are extremely high, stunting or yellowing may occur earlier in the season. The only sure way to confirm SCN presence is by soil sampling. SCN can sometimes be more severe in sandier soils or areas of high pH.

It is important to identify the cause(s) of prematurely dying areas because this information will be important in developing a management plan for the next time soybeans are planted in the field. More information on management of these diseases can be found on the Soybean Research & Information Network.