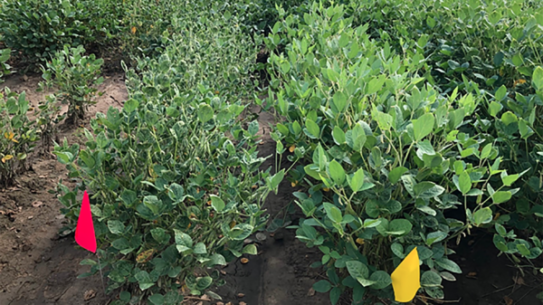 Dicamba tolerant soybean was released in 2016 and was widely adopted to combat glyphosate resistant weeds.   Reports of off-target movement of Dicamba onto non-tolerant crops quickly followed the release of the technology.   In 2017, the USDA logged over 2700 official drift cases.  Of the 2700 cases in 2017, 2300 cases were recorded in the midsouth.  Nearly 3 million acres of soybean had problems related to cupping, plant stunting, abnormal leaf development, and yield penalty due to dicamba exposure.

Many conventional farmers have felt obligated to plant dicamba-tolerant soybeans to protect themselves against neighbors who might potentially drift.  The cost of this decision includes the loss of non-gmo contract premiums, which average $1.00 to $1.50 per bushel in the mid-south.

With funding from the Mid-south Soybean Board, University of Missouri soybean breeder, Dr. Pengyin Chen and his master’s student, Caio Vieria; are making excellent progress against future Dicamba drift damage.  Public institutions do not have access to the Xtend technology for breeding purposes. However, Dr. Chen’s team has developed 200 high-yielding soybean lines showing natural tolerance to Dicamba.  The Missouri team is also working to identify regions of the soybean genome that regulate tolerance to Dicamba.  Once the natural tolerance markers are found, existing lines in the entire germplasm collection could be identified.  The ultimate goal will be more affordable, non-gmo, public, dicamba-tolerant lines.  These lines could be used to fill non-gmo contracts, which are in high demand according to mid-south soybean buyers.

While these new lines could be used to protect against neighboring farms drifting dicamba onto non-traited plants, dicamba could not be legally sprayed over the top of the naturally tolerant soybean lines without a label change.  There is currently no label allowing Dicamba to be sprayed over conventional soybeans.  However, since Dicamba is off-patent, farmers could partner with chemical providers to register a legally labeled Dicamba product for use over these naturally tolerant lines.  This research was funded through checkoff funds from Arkansas, Louisiana, Mississippi, Missouri and Texas.  As a result, one naturally tolerant dicamba-resistant line will be made available for public breeding in the midsouth.  This is just another example of how the checkoff can bring value back to the farmer.

Photo provided by the University of Missouri