Are You Looking Under your Leaves? 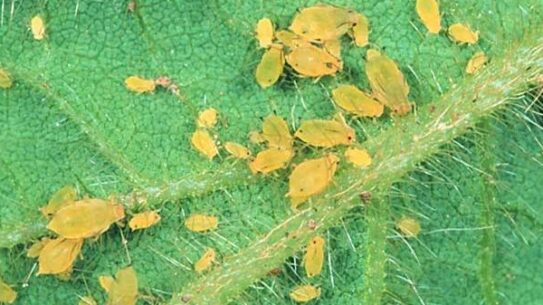 It’s that time of year when insects can be found lurking in your soybean fields. And while the Ohio Soybean Council invests checkoff dollars in finding new ways to control them, it doesn’t hurt to be reminded of the need to regular field scout and identify insects to protect your crop.

Farmers are pretty good about looking for the familiar pests, like soybean aphids and brown marmorated stinkbugs, and common defoliators such as bean leaf beetles, Japanese beetle adults and grasshoppers. But as this summer progresses and parts of Ohio are still reporting hot, dry weather, other insect problems are popping up. That includes spider mites.

While we generally don’t see spider mites until August, they often are found in July when sustained periods of hot, dry weather occur like we have seen in parts of Ohio this summer. Be on the lookout as spider mites are easy to miss in early stages and they spread quickly.

The best thing to do is look for light-colored stippling damage – that is easier to see than the mites themselves. In areas with heavy stippling, you can confirm presence of mites by tapping vegetation over black construction paper. The mites look like specks of dust that move.

Ohio State University entomologists recommend treating for mites by field, not just along the edges. Most pyrethroid products (with exception of bifenthrin) are not effective against spider mites. Consider Lorsban or generic insecticides, but keep in mind that any treated field will need to be checked five days after application for resurgence. These products do not kill mite eggs.

With that said, entomologists do say there are specific miticide products that are particularly effective in killing mite eggs and eliminating the next generation. And any resurgence of moisture will go a long way in reducing spider mite populations, too. Mites are particularly susceptible to fungal insect/mite killing pathogens which are favored by moist conditions.

Other dry areas are reporting an increase in the appearance of young grasshoppers in soybeans. Grasshoppers often start on field edges, so early scouting may allow for an edge treatment. Japanese beetlesare another common soybean defoliator that are starting to appear. Economic damage by both of these pests can be measured with general rules of thumb. Entomologists recommend treatment if defoliation approaches 20 percent on the majority of plants in post-flowering beans. This visual defoliation guide is a good reference.

In addition, entomologists are giving farmers a head’s up for a couple of insects that may just be finding their way into Ohio. One is the red headed flea beetle that has been confirmed in the Midwest. This small, narrow, shiny black beetle with a red head springs like a flea when it is disturbed. When it feeds in soybeans, it creates small round holes. While the flea may not cause any economic damage, any defoliation of 20 percent or more merits concern.

The other insect not yet seen in Ohio is soybean gall midge. It has been identified in Missouri, Iowa, South Dakota and Minnesota so far, so we are preparing for the future possibility by investing checkoff dollars in developing an information and identification postcard for farmers that will be available and distributed later this year. Since the new pest had never been seen before, an insect taxonomist had to help make the formal identification to determine that it actually was a new and not a previously named species.

Be sure to look under the leaves this summer. If you aren’t already receiving our Field Leader newsletter to stay up to date on insects and other concerns, sign up at  www.ohiofieldleader.com.